The Freeborn American Legion Auxiliary Post No. 552 started its new year by meeting on Sept. 19 in the Freeborn Legion Hall.

President Sandy Anderson called the meeting to order. The Pledge of Allegiance and the auxiliary pledge were recited. Sandy gave the secretary’s report, and it was approved as read. The treasurer report was given and approved. There were no bills to present.

The group’s girls state representative Claire Bias attended the meeting and gave those in attendance an awesome summary of her week at Girls State. She would recommend going to any girl that is offered the chance to go.

The group received three thank-you notes since the last meeting. They also received a department citation for increasing junior membership by 20 percent.

The poppy report from May was given under old business. The group decided on the poppy order for the coming year, and they will be ordered by the treasurer.

Memberships were discussed. They still have a few members who have not yet renewed. Anderson will be notifying them in the next newsletter.

The group’s by-laws have been revised and Sandy has a copy available for any member that would like a copy.

Sandy announced that the new department president is Sandy Fredrickson and the new first district president is Pay Miner. Anderson will invite them to our upcoming events.

Santa/hospice tree lighting/Christmas potluck and bingo party will be on Dec. 6 at Freeborn Legion Hall. Santa will arrive at 3 p.m., and this is sponsored by Freeborn American Legion. The Auxiliary will be serving coffee and cookies while Santa is there. At 4:30 p.m. the Hospice tree-lighting ceremony will take place with the reading of the names to be remembered. The Auxiliary potluck will follow at approximately 5 p.m. and bingo will begin at approximately 6 p.m. The entire community is invited to these events, and no one leaves bingo empty-handed.

The group dispersed some of their funds from the poppy fund by donating to the department president’s projects, to the $5 bill shower, to the ALA Hospital and to the Christmas gift shop. The group will decide at another meeting whether more will be donated.

With no other business, the meeting was adjourned. The next meeting will be Oct.17.

The regularly scheduled meeting of the Women Veterans of Freeborn County was on Sept. 9 at American Legion Post 56 in Albert Lea.

The group had their guest speaker for the month. Danielle Elg, clinic administrator of the Albert Lea Veterans Affairs, joined the group and gave them an update on several issues.

Topics discussed included an open house in October geared toward enrolling more vets, montly growth, mental health staff availability, counseling for post traumatic stress disorder/depression/sexual assault/etc. availability, an on staff podiatrist, dietician, pharmacist contracted with two pharmacies, the Veteran’s Choice Program is not running smoothly, any veteran can walk in for a flu shot from Oct. 27 through Oct. 29, the clinic is trying to set up a regular newsletter and they will start doing identification cards on the first Friday of every month.

The group is thankful to Elg for her information and looks forward to working with her through the years at Albert Lea VA Clinic.

Luedtke shared an article about Social Security from the AARP magazine. Social security is 80 years old this year. Franklin D. Roosevelt started the program during the Great Depression. It is not a handout. It is basically an insurance plan whereby workers contributed a little out of each paycheck and received a monthly stipend upon retirement. The first three numbers on a Social Security card identify the state or region where the card is being issued. The second two numbers group the individual within the state or region. The last four numbers tally the individuals in the group. The group found it interesting where the numbers were derived from.

Luedtke brought in information about a new “Freedom Carnival Cruise” for women veterans scheduled for April 29, 2017. The seven-day cruise leaves from Galveston, Texas, with stops in Key West, Freeport and Nassau. The cost is $489 per person. More information is available at 479-212-1028 or email marypinkley@springchickentravel.com.

The treasurer’s report was given.

St. John’s Lutheran Community requested help with a dessert consisting of pre-cut bars for the annual auxiliary luncheon scheduled from 11 a.m. to 1 p.m. Sept. 20. Johannsen volunteered to take some bars.

All members are asked to bring a nonperishable food item to donate to the food pantry after each monthly meeting. Luedtke delivered the donations to the food shelf this month.

Olson brought in a delicious peach shortcake for dessert.

The next scheduled meeting will be at 11:30 a.m. Wednesday at American Legion Post 56 in Albert Lea.

All women veterans from all military branches are welcome to join the group. 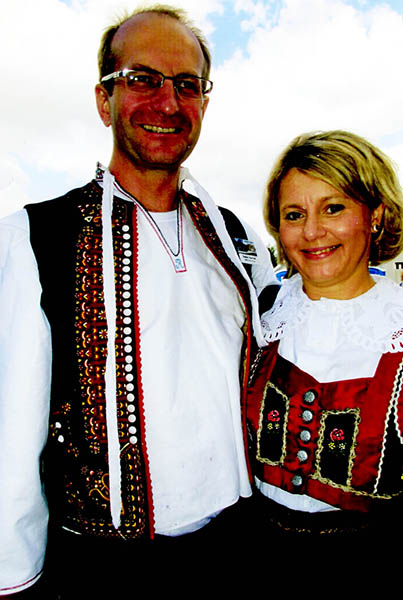 Pavel and Petra Vild from the Czech Republic participated in the Czech Festival. – Provided

Western Fraternal Life Association Lodge Zare Zapadu No. 44 hosted their annual Czech Festival on Sept. 12 at Bohemian Brick Hall north of Myrtle. According to a press

release, the group was privileged to have nationally famous star  Molly B of RFD TV out of Branson, Missouri, as their entertainer along with her band. About 800 people attended the event.

Fellow lodge members attended from St. Paul, Minneapolis, New Prague, Owatonna, Austin, Cadott, Wisconsin and Protivin, Iowa, as well as people from Massachusetts and New Jersey. There were also international guests from the Czech Republic, including Petra and Pavel Vild of Klatovy, Czech Republic. The couple danced for eventgoers, and Pavel Vild also danced with Molly B to the delight of the crowd. There were kid games, food and beverage, a bake sale, popcorn and a silent auction which took place inside the Brick Hall, which is listed on the National Register of Historic Places in America. Proceeds from the event will be used for the preservation of the hall and grounds.

Jerdee read a proposal made by the executive board to have quarterly meetings beginning in January. This will be voted on at the October meeting.

Volunteer Coordinator Carla Reichel reported that there were 988 volunteer hours for August, 15 daycare hours, two You & Me Clubs and one sing-a-long. She also announced that Octoberfest will be on Oct. 15 and the Haunting Tunnel for Halloween will be Oct. 29 through Oct. 31.

The program was provided by Bev Jackson-Cotter, storyteller and volunteer at the Art Center. She read her Noah’s Ark story and shared many stories about her life.

The Table Prayer was sung and the meeting was closed with the Lord’s Prayer.