Funeral services for Pearl Lindeman, 98, of Albert Lea will be at 1:30 p.m. Tuesday at Salem Lutheran Church. The Rev. Mark Neithammer will officiate. Burial will be at Hillcrest Cemetery at 3 p.m. Friends may greet the family one hour prior to the services at the church. Online condolences are welcome at www.bayviewfuneral.com. 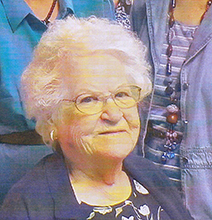 Pearl Lindeman was born on Oct. 9, 1916, at Buffalo Center, Iowa, the daughter of Peter and Mary (Hauskins) Haukoos and was baptized into the Lutheran faith. She was confirmed at Faith Lutheran Church in Walters. She was given the name Pearl, the same name as a sister who died in infancy. She had 10 older brothers and three younger sisters. Her formal education consisted of eight years at the Walters one-room school house. Like many of her generation, she helped relatives and friends with child care and housekeeping at a very early age. She had a life-long connection with Walters, where she grew up and where many of her siblings lived. Pearl was proud of the “big brick house,” the Haukoos family home.

Pearl married Harry Lindeman on March 28, 1938, at the Little Brown Church in Nashua, Iowa. They farmed near Freeborn, then Mansfield. They were blessed with four daughters: Judy, Carole and Colleen (twins) and Mary. In 1953 they moved to Albert Lea, where Harry worked for Rilco/Weyerhauser Company and Pearl worked for Hotel Albert, and later for Albert Lea High School in food service. In 1956, the Lindemans joined Salem Lutheran Church, where Pearl was active in many Salem activities — choir, LCW, quilting group and Pairs and Spares. Her life revolved around her large family, church activities, music, flowers and gardening, and her love of anything with a butterfly on it was well known. She loved singing and was able to play the piano by ear. She bought a loom to weave rugs, and she and Harry joined together to make quilts for family and friends. Harry would lay out the designs of the squares and Pearl would sew them. She was always willing to help and was happiest when she was sharing and giving to others.

She was preceded in death by her parents; husband Harry; her 10 brothers: Russell, Otis, Lester, Herman, Harold, Milliard, Leonard, Joseph, Wallace and Tommy and their wives; sisters: Frances Sauer and Marian Behr and husbands; and son-in-law, J. David Larsen.

Memorials may be sent to Salem Lutheran Church, St. John’s Foundation, Hillcrest Cemetery or a charity of your choice. The family would like to express our gratitude for the exceptional nursing care and personal attention given by First North staff during the many months Pearl made St. John’s her home.