Residents weigh in on plans for Blazing Star 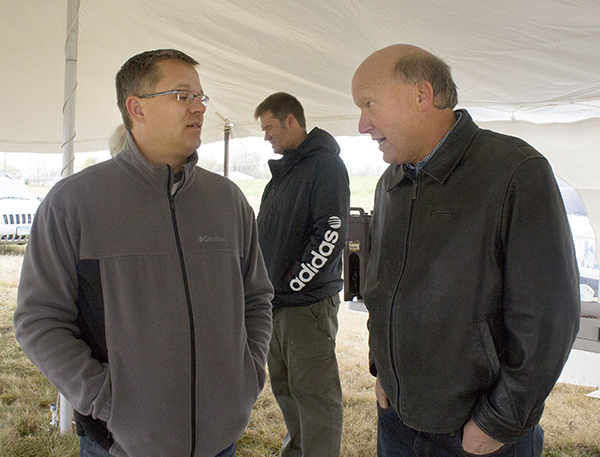 Residents expressed excitement and apprehension Saturday at an open house conducted on the Blazing Star Landing.

The open house was held in connection with the city’s plan to request $15 million in state bonding to develop the property. Albert Lea City Manager Chad Adams discussed the plan and fielded questions and remarks from residents.

“I think it’s great they’re looking forward,” Albert Lea resident Tom Drake said. “I like that they are investing in the future.”

The city is requesting $3.5 million for moving Front Street north to make way for lakefront development and preliminary preparation work north of the railroad, included in the first phase of the project. Other funding is expected to come from new taxes created and captured from private lakeshore development and land sales. No local tax increases are proposed for the relocation of Front Street.

Relocation of a portion of the Blazing Star Trail is planned as part of phase one, but the city is planning for the trail to remain as a connection from Frank Hall Park to Myre-Big Island State Park.

The city is requesting $11.5 million for the second phase of the project that includes the construction of an approximately 115,000-square foot community center plus additional work north of the railroad.

The project will not begin until private development is secured for the site, Adams said.

The community center would include space for senior services and programs, meeting and activity rooms, a four-lane walking and running track, a fitness room with free weights and cardio, studio spaces, an aquatics area, an indoor play park, game room, four-court gymnasium, racquetball courts and childcare, among other amenities.

Funding for the community center is projected to come from new taxes created and captured from private development, $3.5 million in local fundraising, land sales and a likely tax levy increase.

The estimated tax increase on a $100,000 home is projected to be between $50 and $60 for 30 years. Other funding options are being explored, according to the city.

The city will work with public and private developers to decide the best uses and layout for the lakeshore property. City officials said ideas have included a restaurant and marina, retail shops, market rate rental housing, residential condominium or any combination of mixed uses.

The first two phases of the project are expected to cost $42 million.

The funding is for the first two phases.

“We want to listen to the residents,” Adams said of why the open house was held. “We have had a good turnout today. A lot of great conversation with some quality feedback.”

The land has sat unused since a fire at the former Farmland Foods plant in 2001, and the owners opted not to rebuild.

The Minnesota Senate Capital Investment Committee will hear presentations from the city Thursday. An open house will be held from 4:30 to 6:30 p.m. today at the site.

Following the open house, the Albert Lea City Council will consider a resolution showing support for the city’s bonding application. A public forum will be held.

The development will allow space for a hotel and other retail, including multi-story, mixed-use buildings where visibility from East Main Street is high, he said.

The city displayed two options for development at the open house. The options feature different locations for facilities in association with the proposed development.

Adams said feedback has indicated Option B as preferred because of several factors, including:

• Retail and hotel access and visibility from Main Street.

In Option B, a separate lakefront district is envisioned by the city south of the railroad tracks, where a mix of small retail and residential areas are oriented toward the water with a lakefront promenade that the city said will enhance public access and activity at the waterfront.

Additional public forums and comments are advised before March when the bonding bill is being considered before the state Legislature and governor’s office.