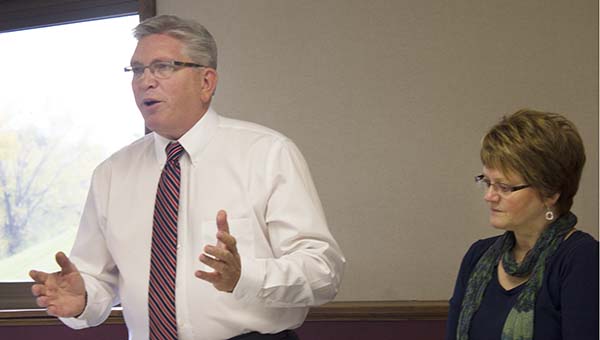 Gary Schindler speaks next to his wife, Jeanne, at the Union Center in Albert Lea on Wednesday. The dean of student affairs at Riverland Community College announced he will seek the DFL nomination for the District 27A Minnesota House of Representatives seat in 2016. — Sam Wilmes/Albert Lea Tribune

The dean of student affairs at Riverland Community College announced Wednesday he will seek the DFL nomination for the District 27A Minnesota House of Representatives seat in 2016.

In front of a group of people at the Union Center in Albert Lea, Gary Schindler said he looks forward to meeting the people in the area and discovering the needs here.

“With the support of my family, I plan to meet our community and county leaders across District 27A and the residents of south central Minnesota to hear of their concerns and what issues they would like the state Legislature to address to make us greater here in greater Minnesota,” Schindler said.

Incumbent District 27A Rep. Peggy Bennett, R-Albert Lea said having another candidate gives the voters an option to study the candidates and the issues and another option in the direction they want their government to go.

“He seems like a really nice guy,” Bennett said. “It’s good to have multiple people run. I welcome people running for office. It’s what the state and country are all about. I think it’s a good thing he’s running.”

Schindler, 59, wants his campaign to focus on workforce development. He is approaching the issue with a five-pronged approach:

Access to quality roads and bridges. He said that is necessary for the area’s education and economy.

“The lack of a bigger commitment to provide workforce housing has left our cities and businesses short,” Schindler said. “Access to housing is not just an investment in lumber and nails and shingles, it is an investment in us.”

Investing in the K-12 education system.

Schindler said the state needs to continue to invest in the education system and in quality, affordable higher education to provide children and residents the opportunity to develop skills for the workplace and employers’ access to a quality workforce.

Schindler said farmers and owners of commercial buildings take too big of a tax hit. He said the state needs to increase local government aid for communities in south central Minnesota to reinvest in their communities.

He supports a state transportation plan but not an increase in the gas tax to support it.

The district has historically been a swing district, and in 2014 more than $377,000 in independent expenditures were reported for Bennett and DFLer Shannon Savick of Wells in the 10 months leading up to the election.

“I’m sure he’s a great individual,” Hensley said. “Obviously he’s trying to challenge Peggy Bennett, who has done a great job as a first-term representative.”

Schindler has a wife, Jeanne, and two children, Kelli Schindler-Nelson and Daniel Schindler.

Prior to coming to Albert Lea in 1989, Schindler was a social studies teacher and counselor.