Funeral services for Robert W. Woodard, 98, of Albert Lea will be at 3 p.m. Saturday at First Lutheran Church in Glenville. The Rev. Jim Rushton will officiate. Interment will be at Greenwood Cemetery. Visitation will be one hour prior to the service at the church. Online condolences are welcome at www.bayviewfuneral.com. 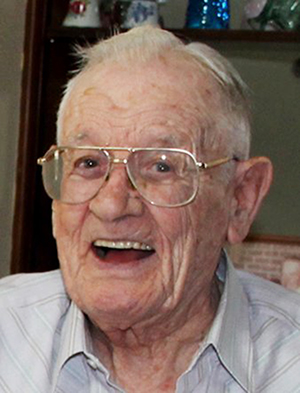 Robert W. Woodard was born April 2, 1917, in Eagle Grove, Iowa. Bob grew up in Albert Lea and graduated from Albert Lea High School. After graduation he worked at Wilson & Co. On Jan. 21, 1939, Robert was united in marriage to Margaret Nelson in Northwood. They lived in Albert Lea until 1953. The couple then made their home northeast of Glenville where they lived and farmed for 50 years. Robert was a member of First Lutheran Church in Glenville. He enjoyed playing cards and cribbage, having coffee and visiting with family, and he always made time for his great-grandchildren.

Robert was preceded in death by his parents; wife, Margaret; and brothers Virgil in infancy and Johnny in World War II.