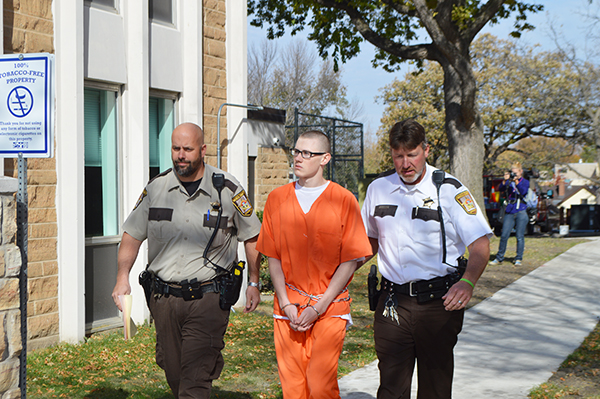 Waseca County sheriff’s deputies lead John David LaDue away from the Waseca County courthouse toward the jail following sentencing on one count of possession of explosives.
– Jacob Stark/Waseca County news

18-year-old will be sent to treatment in ga.

A District Court judge, acknowledging the fear that swept over the city of Waseca as it learned of a 17-year-old’s plot to kill his family and carry out a deadly school massacre, sentenced John David LaDue Monday to up to 10 years probation.

Judge Joseph Chase, who acknowledged his role in the case was minor compared to the judges who dealt with the larger issues of probable cause and whether to try LaDue as an adult, said he read through most of the documents in the case, finding that the statement of Waseca Schools Superintendent Tom Lee helped him to understand the true impact LaDue’s actions had on the city and its residents.

“It brought home powerfully how a community would react to shocking news like this,” he said, saying Lee likened each of LaDue’s court hearings to having a scab torn off a wound.

And while Chase empathized, he implored area residents not to shun LaDue once he returns to the community.

“Experts advise that treating Mr. LaDue as a pariah … is what not to do,” the judge said, telling residents that they have a part to play in LaDue’s future and ensuring the community’s safety.

“If he is again allowed to be an under the radar loner, the risk increases,” Chase said.

LaDue, 18, who pleaded guilty last month to one count of possession of an explosive device, has been diagnosed with a type of autism spectrum disorder that was previously referred to as Asperger’s syndrome. According to Autism Speaks, those affected with Asperger’s “have difficulty with social interactions and exhibit a restricted range of interests and/or repetitive behaviors.”

LaDue will first be sent to a secure facility where he will receive treatment for his autism and fixation on violence.

The fixation, Waseca County Attorney Brenda Miller told the court, is the “most difficult component,” and added that it’s what sets him apart from others with autism.

LaDue is expected to move to Devereaux, a secure treatment facility just outside Atlanta, though the state of Georgia needs to approve the transfer and insurance coverage must be finalized. That could take three to four weeks to complete. Until then, LaDue will remain in the Waseca County Jail.

According to its website, Deveraux provides “intensive residential treatment in a secure setting for youth ages 10 to 21 who are facing significant emotional, behavioral and intellectual/developmental challenges.” LaDue will remain at Deveraux until he completes treatment, which could last until after his 21st birthday.

Once discharged from that facility, Chase ordered LaDue to be moved to a less secure facility, likely a halfway house, before moving back into the community where he will be under intensive supervision.

LaDue was arrested in April 2014 after two area residents noticed LaDue, entering a nearby storage facility, acting strangely, and called police. Inside the storage locker were bomb-making materials. LaDue confessed to detonating small bombs at a church, school and park around town, and said he’d been planning a large-scale massacre at his school that involved killing his family and the school liaison officer. It ended, he said, with his death at the hands of law enforcement.

While LaDue was initially charged with attempted murder and attempted damage to property, a district court judge found there wasn’t enough evidence to try him on those charges, a decision affirmed by the state Court of Appeals.

In August, LaDue was certified as an adult and charged with six counts of possession of explosives. He agreed to plead guilty to one count in September, a deal that ensured he got the treatment psychologists testified he needs.

“It is our belief that this plea offer is the best outcome possible, under the circumstances, to ensure public safety,” Miller, the prosecutor, said in a Sept. 18 press release.

Should LaDue violate his probation, he could be sent to prison for up to 22 months.