Small in stature, big in heart 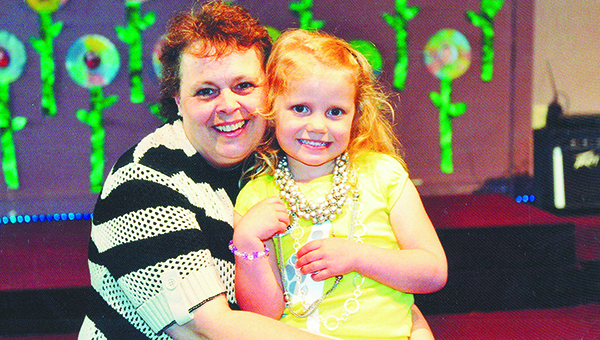 Beth Berhow may have been small in stature, but she made a big impact to many preschoolers over her years of teaching.

“She had a great sense of humor. I think you have to when you’re working with that age group,” Beth’s daughter, Amber Jones, said about her mom. “She really connected with kids that age and how they think, and how their minds work, and how they love.”

Beth passed away Sept. 11, 2015, at Methodist Hospital in Rochester, surrounded by loved ones.

Beth was a teacher by career but also by nature. Jones said her mother was always teaching, no matter where they were or what they were doing.

“I think teaching — and especially preschool — was more of a lifestyle than a career,” Jones said. “Everywhere she went she was a teacher.” 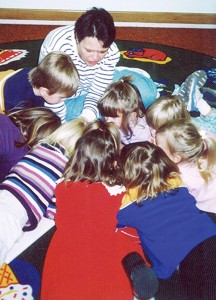 Beth Berhow sits with several of her former students in her early days of teaching. – Provided

“She was a preschool teacher for 35 years and just lived for 2-, 3-, and 4-year-olds,” he said. “She had a memory that, we could walk through the grocery store and she could pick out some parent that she had 20 years ago and she could name siblings and relatives.”

Beth’s love for teaching may have stemmed from her own mother’s career as a teacher, and Jones said it’s something her mother always had a desire to do. Regardless of why she became a teacher, Beth followed the path with unconditional kindness, respect and love.

Beth always believed in every student who passed through her classroom, believing each one would go on and do great things.

“She believed in the importance in those early years and what a difference you can make at that time,” Jones said.

Steve remembered his wife’s small stature, and how that may have helped her get along with the small students.

“She was a very small person, but boy when she got angry she’d turn into about 7-foot,-2,” he laughed. “She was about the same size as a lot of the children, and she just came to click with them I think.”

Beth was also known for her work with Paint the Town Pink. After she was diagnosed with cancer, she worked closely with other organizers of the event to get other cancers involved.

“She got all the ribbons for all the different cancers, because she knew that breast cancer was huge but that was just one form of it,” Steve said.

“She just wanted to make it aware to everybody,” he added. “And I think she accomplished a lot of that in her battle.”

Beth was a homemaker, taking care of the home and cooking while caring for and teaching her own two children about life.

“She taught my brother how to bake, and she failed miserably with me,” Jones laughed.

Beth loved family, which was another lifestyle that was a part of who she was. Steve said she was one of the best things to ever happen to him, being both an excellent wife and mother.

Jones said her mom always planned to be a teacher and a mother, which was good since the two work well together. She spent much time with her family, especially when grandchildren came along.

Yet Beth didn’t only teach students and her own family, as many parents also learned a thing or two from her. Jones recalled many parents saying they learned a lot from their child’s teacher.

“They learned a lot about parenting from my mom,” she said.

Steve agreed, saying Beth got along with both parents and children alike, and taught parents a lot about patience.

“Her biggest attribute would be her way to get along with parents, and the parents would be the first ones to say she just was amazing with their children,” he said.

Jones said her friends and her brother Luke Berhow’s friends always loved coming over to hang out at their home because there was always plenty of things to do and always a lot to eat.

Over all the years Beth taught, she heard a lot of different things from children, many of which she kept in notebooks filled with quotes.

“She’d write these quotes down and it was just neat,” Steve said. “She just found good in everything and liked to keep track of it.”

After Beth passed away, her family found several jars filled with quotes and messages for them. Jones said the family could just imagine Beth wanting them to share a laugh together.

“We were lucky to have her,” she said.