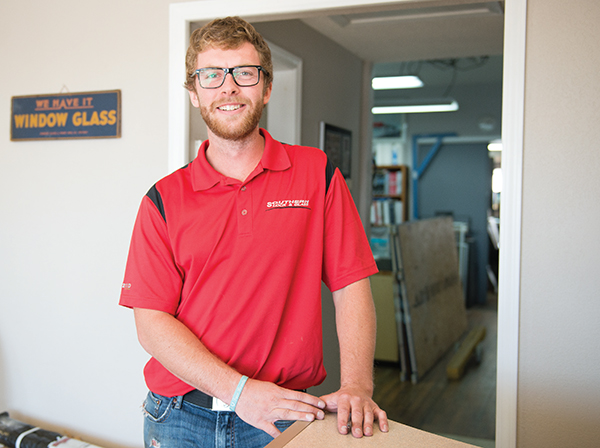 Josh Flatness is the operations manager at Southern Lock & Glass. His parents Keith and Angie Flatness own the business, and his brothers Brady and Dalton Flatness also work there. – Colleen Harrison/Albert Lea Tribune

Named the Small Business of the Year Thursday night, Albert Lea-based Southern Lock & Glass is a family-owned business that offers a wide variety of services throughout the area.

Co-owners and husband and wife Keith and Angie Flatness founded the company, at 717 Marshall St., in January 2008. The business provides residential, commercial, industrial and auto-glass services to public and private companies. 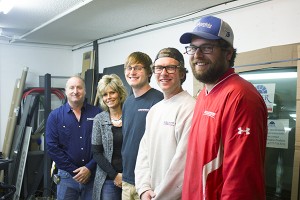 The company has grown approximately 20 percent each year since its beginning, Keith Flatness said. The business’ customer base has spread to a six-state area in the upper Midwest.

According to Keith Flatness, the business has approximately 300 to 500 commercial return accounts.

“So far it’s going unbelievable, stronger than I ever thought,” he said.

Five family members work at the company, including Keith, Angie and their sons Dalton, Josh and Brady, along with one other person who is not part of the family.

“A lot of people don’t know how we do it without killing each other,” Josh Flatness said. “It’s nice that we know each other so well that we make it work really well. We all have our own little niche in this.”

The business owners purchased a 6,000-square foot facility near Mills Fleet Farm, five times the size of their current 1,200 square foot building. They hopes to move in by the end of the year.

“We are 100 percent family owned and take great pride in our work because of that,” Josh Flatness said. “It’s our reputation on the line every time we show up to a customer’s home or jobsite. We want customers to know they came to the right place and had a positive experience.”

Word of mouth recommendations are the best way to spread the word of the business, he said.

He said the company usually has to leave the state at least once a week for jobs.

“Anytime we hear someone gave us a good recommendation, we know we’ve done a good job,” he said.