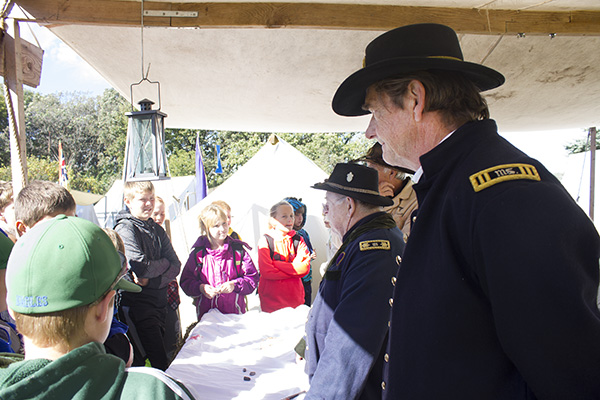 Re-enactors describe historical events to students during the Big Island Rendezvous Education Days at Bancroft Bay Park. The Rendezvous will be open to the public Saturday and Sunday. -Sam Wilmes/Albert Lea Tribune

Students from across the area gathered on a sun-splashed Thursday for the first day of the Big Island Rendezvous at Bancroft Bay Park.

“They had to leave their laptops and be outside,” said Erin Johnson, a sixth-grade teacher at IJ Holton Intermediate School in Austin. “They get to experience the atmosphere. One of my students told me it’s like what they see on television.”

Some re-enactors looked at the Rendezvous as a passion.

“I would stay here 10 times longer if I could,” said Laura Swenson, a re-enactor from Baldwin, Wisconsin. “The kids are delightful and they love to learn. The camaraderie between groups is nice as well.”

There are expected to be between 2,000 and 3,000 students from between 40 and 50 schools during Thursday and today, the two education days. There are about 60 stations offering demonstrations.

Students from the Minnesota State Academy For the Deaf in Faribault also attended the event on Thursday.

“It’s awesome,” said Andrea Kunkel, a middle-school teacher at the school. “There’s a lot of hands-on activities so our students can have the touching experience. They can also visualize this by seeing how people of these areas dressed.”

Students also were impressed by the event.

“It’s just really cool seeing what they had back in the day,” said Leah Kramersmeier, a sixth-grader at North Iowa Middle School.

Live music and dance will be on both Saturday and Sunday, including the Roe Family Singers, Timbre Junction and Curtis & Loretta. On Saturday only will be Wild Goose Chase Cloggers, Adam Granger & Dick Kimmel and Poor Benny.

A wide variety of food will be available.

Visitors can experience the fur trade period in the Voyageur encampment, take Native American wigwam and tipi tours and check out the Scottish Clann Tartan, the New Ulm Battery and many early American crafts such as woodworking, blacksmiths and candle making. 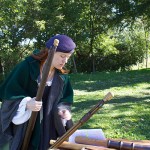 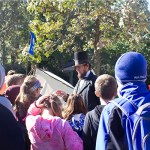 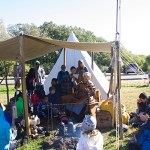 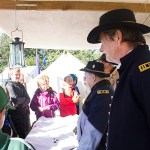 Re-enactors describe historical events to students during the Big Island Rendezvous Education Days at Bancroft Bay Park. The Rendezvous will be open to the public Saturday and Sunday. -Sam Wilmes/Albert Lea Tribune