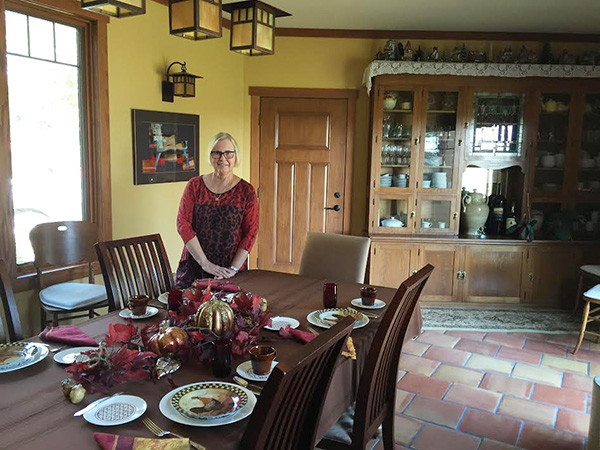 Katherine Pacovsky, co-owner of the The Czech Inn in Hayward, serves guests breakfast daily in the dining room of her establishment. – Kelly Wassenberg/Albert Lea Tribune

HAYWARD — Buildings are made of more than wood and brick. In the case of The Czech Inn, they are sometimes built out of a compromise.

Joe Pacovsky had a childhood dream of being a farmer, and after retiring from his career as an engineer he had the perfect place in mind to live out that dream. In 1984, he had bought a property at auction that had belonged to his uncle, and his grandfather before that. He had rented out the 120 acres, but the house on the property laid vacant until it was eventually burned to the ground by arsonists. He wanted to return to the property, which wasn’t too far from where he grew up in Glenville.

His wife, Katherine Pacovsky, was a little more reserved about the idea of moving from Marshfield, Wisconsin, to the countryside, yet she also wanted her husband to be able to make his dream come true so she offered him a compromise.

“I told him he would have to build me a bed and breakfast,” she said. “And he did.”

The idea was quite spontaneous.

“We liked staying in bed and breakfasts so it wasn’t something foreign to us, but I never thought we’d own one,” Katherine Pacovsky said of her solution to a problem she foresaw with living in the county.

She really liked being around people and felt a bed and breakfast would allow her husband to farm while still giving her the social time she needed.

The journey from a vacant property to a functioning inn would be wrought with hardship. Katherine Pacovsky said the contractor actually tripped over weeds and brush at the property while surveying the land in 2011 in anticipation of beginning the build.

After the land was cleared and building commenced, so did the phone calls, and she felt it would be easier if she was onsite in the only structure standing on the property at the time — a 12 foot by 16 foot shack that had no running water or electricity.

Looking back, Katherine Pacovsky said she would have chosen another option; however, she originally thought her sleeping arrangements would be temporary. She ended up living in the shack for months before finally being able to move into the inn, which opened in 2012.

The mission-style home that resulted from her own designs was worth the sacrifice.

“My two goals were that when you would drive by it would look like this house had always been here. It won’t look like a new build and then I didn’t want it to look big and ostentatious.”

She said she feels these goals were met and visitors’ questions asking how much it cost to renovate the property support her opinion.

The inn features five guest bedrooms that have their own private bathroom, along with common areas such as a dining room, library and large meeting room that can be utilized by guests. Each room has its own theme and is decorated with various antiques.

Along with a comfortable bed, guests who choose to have breakfast at the inn get the treat of being able to dine on the Czech treat of kolaches every morning that are served with whatever gourmet breakfast the couple whips up that day.

In addition to serving the first meal of the day, the Pacovskys pride themselves on providing top-notch hospitality to their guests, who often leave as friends and have even bonded with other guests during their stay.

“Our guests really seem to mesh well with each other,” Katherine Pacovsky noted.