Theodore “Ted” C. Mattick, 79, of Albert Lea, formerly of Kiester, died Friday, Oct. 9, 2015, surrounded by his family and friends at St. John’s Lutheran Community in Albert Lea. A funeral service will be at 11 a.m. Monday at Our Savior’s Lutheran Church in Kiester, officiated by the Rev. Katie Pals. Visitation will be from 4 to 7 p.m. today at Bruss-Heitner Funeral Home in Wells and one hour prior to services at the church on Monday. Military honors will be accorded by the Kiester American Legion Post. Interment will be at Mansfield Lutheran Cemetery in rural Alden. Bruss-Heitner Funeral Home in Wells is handling arrangements. Please see www.brussheitner.com to leave online condolences. 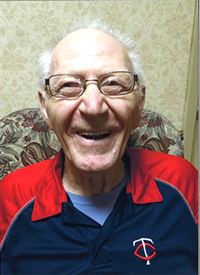 Ted was born April 2, 1936, in Mansfield Township in Freeborn County, the son of Clarence and Viola (Meyer) Mattick. Ted was baptized and confirmed in Mansfield. He attended numerous country schools and Kiester High School. He proudly received his GED at 65.  Ted honorably served in the U.S. Army from 1953 to 1955.

Ted was united in marriage to LouAnn Helgeson Feb. 20, 1959, at First Lutheran Church in Northwood. Ted worked in sales for Sime Equipment for over 20 years and for L&D Ag in Hartland for 10 years. He spent his retirement years delivering motor homes throughout the country for Winnebago. Ted was a member of Our Savior’s Lutheran Church. He was a volunteer firefighter for several years in Kiester, and also served on the Kiester City Council for a few years. His hobbies were bowling, fishing and traveling. He enjoyed family celebrations and watching the Minnesota Vikings.