Turmoil swirls around U of M president 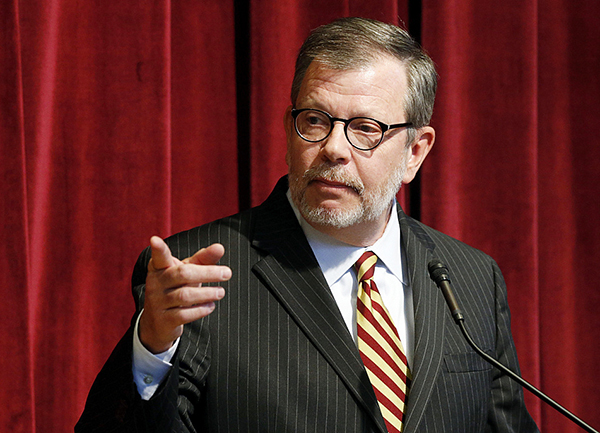 Two of his top aides resigned under pressure. His university was rocked by criticism over the suicide of a drug trial patient. An ex-Minnesota governor demanded he quit.

University of Minnesota President Eric Kaler calls 2015 the most challenging time of his presidency, and it’s not hard to see why. He’s found himself in front of podiums and cameras this summer and fall defending the university and sometimes apologizing for it. Lawmakers are promising greater scrutiny of the U’s funding requests.

But while he’s been targeted as part of the problem, Kaler’s boss backs him — and university donors do, too. Last year, the university raised $351 million, about $62 million more than the previous record-setting period. Those new figures will be released in an annual report later this month.

Kaler has excelled in tough situations, said Dean Johnson, chairman of the U’s Board of Regents.

“It’s easy to let things lag and go on their merry way. It takes courage, and good management in the case of President Kaler, to do something about it and to make a department, a system, an institution, better,” Johnson said. “He has shown that kind of courage and leadership. So if anything, I believe his stature with the board has increased.”

Kaler, who took over in 2011, has had to confront a host of tough issues, including some that were smoldering years before he arrived.

In the spring, Kaler faced criticism from a group of alumni and professors over the U’s handling of the death of Dan Markingson during a clinical drug trial in 2004.

The university was also under investigation after being accused of favoring men’s athletics over women’s sports in violation of federal law.

In early August, Kaler told reporters that he’d accepted the immediate resignation of Gopher Athletic Director Norwood Teague and explained that Teague had sexually harassed two female U employees who were part of the president’s senior staff.

A month later, another senior administrator hired during Kaler’s tenure was out.

The U president said he asked Chief Information Officer Scott Studham to resign because of “the culture in his unit and his relationship with his peers.” Studham was also facing complaints he’d spent university funds on personal items and had hired friends to do consulting work.

Kaler says the timing of both resignations wasn’t great, but that they don’t reflect anything broader about the university and that he can make a good case to lawmakers of the U of M’s importance to the entire state, including the U’s health clinics, extension service and research and outreach centers. He wants state funding for the U system to return to 2008 levels, or about 10 percent more than it is now.

“Graduation rates have gone up. Quality of the entering students at the undergraduate level has gone up. We had a record year last year, $351 million in private funds raised,” he said. “So when I look back, I’m very satisfied with the progress the university has made while I’ve been president.”

There will be more scrutiny when Kaler brings funding requests, “particularly at a time when we’ve seen record tuition, now record student debt and now the university keeps coming back and asking for more money,” said state Rep. Gene Pelowski, DFL-Winona, the lead Democrat on the House Higher Education Policy and Finance Committee.

“He has to step down, and I think that’s ultimately what’s going to have to happen,” said Carlson, who’s ripped Kaler over the unversity’s response to the Markingson drug trial case.

Carlson, who is not on the Board of Regents, says the resignations of Teague and Studham are part of a pattern of poor decision making. “We’re all sitting around waiting for another shoe to drop. How many more shoes are there before we catch on and say, ‘No, you have to have a change.’”

Professor Colin Campbell, a leader on the U’s Faculty Consultative Committee, says there’s some faculty discontent with Kaler’s handling of the Markingson case and the high-level resignations, but generally they’re fine with the job he’s done.

Several involved in a push to unionize want the faculty to have more involvement in the direction of the school. Campbell, who isn’t part of that push, agrees.

“Would that fix anything? I don’t know. But then at least we’d feel like we are part of the decision-making process so if things goes wrong, we’re part of the problem.”

Kaler says the faculty has several avenues to provide meaningful input into decisions about the university’s future and direction.

As to the direction the university takes with its next athletic director, Kaler wouldn’t say whether they’re searching specifically for a female candidate or someone with a strong track record of supporting equity. But he did say they’ll take a different approach in hiring.

A gender equity complaint was filed against Teague while he was at Virginia Commonwealth University in 2012, something Kaler says the search firm should’ve caught. The firm, Parker Executive Search, says it believes that complaint was filed after their vetting process.

“I’ll consider very carefully the degree that I rely on search firms going forward, particularly for vetting purposes,” he said. “In the past, I think institutions like ours would rely on search firms to bring them candidates that they vetted. We certainly will be doing some extra looking this time around.”