Funeral Services for Violet E. Spain of Albert  Lea will be at 1:30 p.m. Thursday at Our Savior’s Lutheran Church in Albert Lea. The Rev. James Kassera will officiate. Interment will be in Lakewood Cemetery. Visitation will be from 5 to 7 p.m. Wednesday at Bonnerup Funeral Service in Albert Lea and one hour before the service at the church. 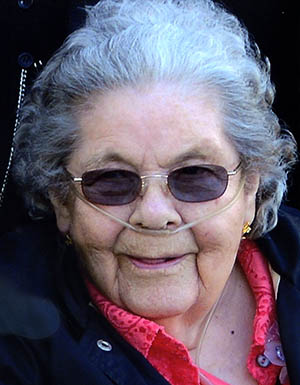 She was born on April 9, 1925, in Canada, the daughter of the Rev. Emil and Petra (Strom) Moller. As a young girl her family moved to Minnesota, and Violet attended country school in Hartland and later Albert Lea Public Schools. She married Pierce Spain on Oct. 17, 1942, in Cape Girardeau, Missouri.

Violet worked for Birdseye Foods in Waseca for more than 20 years before retiring.

She was a member of Our Savior’s Lutheran Church.

Vi and Pierce enjoyed traveling in early years with his work for a carnival and in later years to see the countryside. Violet’s pride and joy was her family. She loved all of them with all her heart.

She was preceded in death by her parents; her husband, Pierce, in 2000; two brothers, Fritz and Rueben Moller; and two sisters, Charlotte Olson and Mildred Ferguson.