51 arrested after I-94 protest 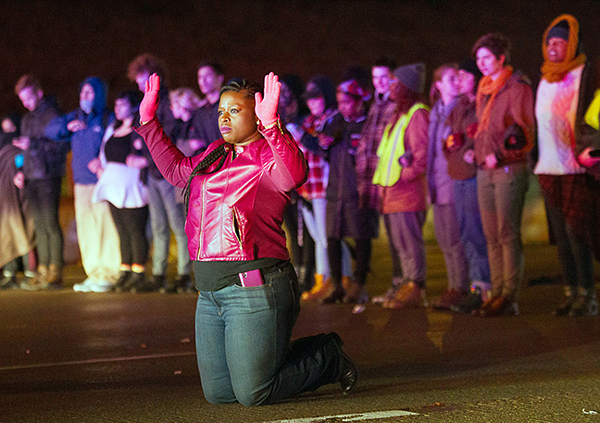 A protester kneels in front of others on Interstate 94 in Minneapolis Monday, refusing to leave after police declared the gathering illegal. Many were arrested. – Judy Griesedieck/For MPR News

Northbound lanes closed for about 2 1/2 hours

MINNEAPOLIS — Hundreds of people protesting the weekend shooting of a black man by a Minneapolis police officer brought traffic to a halt on Interstate 94 Monday night.

Minnesota State Patrol Lt. Tiffani Schweigart said 43 adults and eight juveniles who refused multiple orders to disperse were arrested. She said those being arrested were cooperative and no use of force was required.

The northbound lanes of the highway were closed for about two and a half hours.

The action came just hours after Mayor Betsy Hodges requested a federal investigation into the shooting of 24-year-old Jamar Clark on Sunday. Police said he had been interfering with an ambulance crew who’d been called to a birthday party to aid Clark’s girlfriend.

The shooting sparked protests after some witnesses said he was handcuffed when he was shot. The Bureau of Criminal Apprehension, which is investigating the shooting, said preliminary indications are that Clark was not handcuffed.

The reaction from Black Lives Matter Minneapolis was swift. On Sunday hundreds of people marched several blocks down Plymouth Avenue North from the scene of the shooting to the Minneapolis Police Department’s 4th Precinct headquarters. They hoisted a banner over the entrance and set up a tent, saying they’d stay until their demands are met.

Then on Monday night, several hundred people gathered for another rally outside the police station. Adja Gildersleve with Black Lives Matter Minneapolis said Hodges’ call for a federal civil rights investigation is a good first step. But Gildersleve wants authorities to release any video of the incident that a security camera near the scene may have captured.

“It’s not good for them to be having the footage for this long. And so that’s a priority to us,” she said. “We would also like to see the officer indicted and prosecuted.”

Protesters made their way back down Plymouth Avenue and by 7 p.m. they were on the westbound lanes of I-94. With traffic on the busy interstate at a standstill, state troopers directed vehicles down a grassy embankment to an off-ramp.

Pam Klocek was driving home to Maple Grove when she got stuck in the traffic jam.

“I don’t have a problem with them (protesters),” she said. “I just think this is unsafe, and there’s a better way to do it. I don’t think this is smart. It puts a bigger divide between the communities.”

After the protesters had been on the highway for an hour, state troopers issued the first of several warnings. “Disperse immediately. You need to break up this assembly,” they warned.

Dozens did not heed the warning. Soon law enforcement officers outnumbered protesters and began arresting them one by one.

Some protesters said they’d return to the freeway and shut it down again until all of their demands are met, one of which was an investigation by the U.S. Department of Justice.