A life’s work of art donated 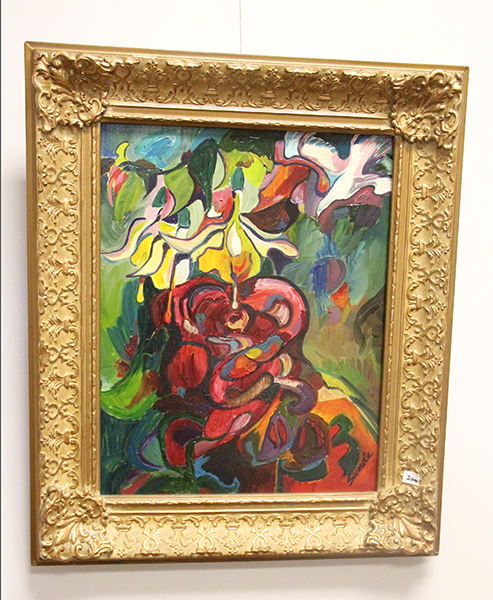 Over 100 of original works of resident given to A.L.’s art center

The Albert Lea Art Center is the recipient of an original collection of artwork made by a former resident whose paintings were featured with the organization in the 1990s.

Merna Sunde, 80, died Oct. 26, 2014, at St. Marys Hospital in Rochester and left her work to the Art Center with the understanding that it would be preserved, displayed and marketed.

Bev Jackson Cotter, chairwoman of the Sunde Collection Committee, said artist Jim Wegner judged and evaluated over 100 of Sunde’s original pieces, ranging in size from 5 by 7 inches to 5 feet by 5 feet.

Cotter said a significant number of the pieces will be placed in the Art Center’s permanent collection and displayed in its galleries and in other venues on a rotating basis.The remaining pieces will be displayed and sold.

Over 1,000 prints of Sunde’s work were also included in the collection.

The collection ranges from work Sunde did as an art student at Mankato State University to work done in her later years, ranging from simple abstracts to complex, large-scale paintings. Horses played a major role in her art, explaining her interest in them when she was younger, as well as geometric forms representing humans, animals, architecture and nature, according to a news release.

Cotter described the majority of Sunde’s work as abstract.

“This has to be one of the most unusual art exhibitions Albert Lea has ever had,” she said. “It’s really an exciting adventure.”

Sunde was born in Forest City, Iowa, graduated high school in Kiester, and after graduating from Mankato State University, taught art in Wells, before marrying and moving to California. After retiring, she moved to Albert Lea. She was featured in shows at the Art Center in 1991 and 1994.

In a Tribune article from April 1991, Sunde described her work.

“I have an excellent memory,” she said. “Everything is stored up here. All the colors and all the feelings I’ve had about different things in my life. You create from your own life experience, and people see it from their own life experience, and it becomes many different paintings. All of my work has something of me in it, and then other people can maybe find something of themselves in it too.”

The gallery will be on display through the end of the month. Other pieces will be displayed on other occasions.

Through Dec. 23, the Art Center will also host Christmas on Clark Street, in which artist members have brought in artwork to sell for Christmas. All pieces are framed and ready to hang or display.

In addition to the pieces in the gallery exhibit there are several items for sale through the Art on Broadway shop, including jewelry, pottery, photos, paintings, prints and art supplies.

The Art Center will host an evening with some of the artists featured in Christmas on Clark Street during the downtown holiday bazaar on Dec. 10. Refreshments will be served, and people will get the opportunity to talk with the artists about their techniques. In addition to regular hours, that day the Art Center will be open from 4 to 8 p.m. 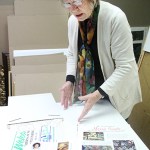 Bev Jackson Cotter shows some information about Merna Sunde, who left the Albert Lea Art Center over 100 of her original pieces following her death in October 2014. – Sarah Stultz/Albert Lea Tribune 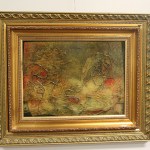 Merna Sunde used some form of yarn or string in this painting, which is one of dozens left to the Albert Lea Art Center and now for sale. – Sarah Stultz/Albert Lea Tribune 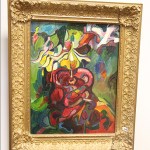 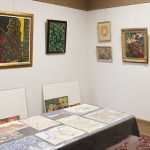 The original work of Merna Sunde adorns the walls of one side of the gallery of the Albert Lea Art Center. – Sarah Stultz/Albert Lea Tribune