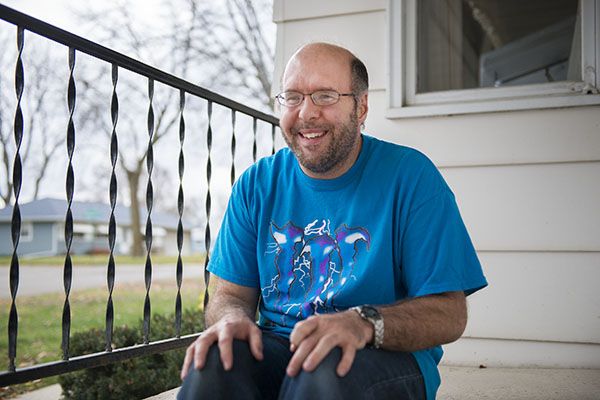 Jeremiah Olson has worked through Cedar Valley Services for 14 years, and has been working at Home Depot in Albert Lea for over one year. – Colleen Harrison/Albert Lea Tribune

For the past 14 years, Jeremiah Olson of Albert Lea has worked through Cedar Valley Services to find employment in the community.

Olson, 38, has worked as a night custodian, cleaning at places such as Poet, Fountain Industries and City Hall, until a little over a year ago when he decided he wanted something more challenging.

With the coaching and extra training from Cedar Valley Services, Olson was hired at Albert Lea’s Home Depot as a lot associate, bringing in shopping carts and flatbed carts and helping people load their vehicles.

“I really enjoy it out there,” he said.

“People with disabilities are just like everybody else,” he said. “They want to work and be a productive person in society.”

Hart said Olson has worked with Cedar Valley Services for several years and started out working with one of the organization’s crews. The crews work at different job sites under the supervision of a staff member, often cleaning.

He said people start out with an easier task such as vacuuming, and then once they master how to vacuum, they get additional tasks. Once they have mastered the additional tasks, there are more independent jobs available.

“Depending on the person’s ability level, we would like to have them work independently,” Hart said.

Hart said Cedar Valley Services works closely with employers and helps provide extra support for employees, making sure they understand skills and rules of the business.

“They really helped me out a lot,” Olson said.

He said if he has had problems, the Cedar Valley Services staff are always willing to talk about it and help him find answers.

The United Way funding the organization receives goes to support things such as job coaching.

A 1996 graduate of Albert Lea High School, Olson said his father lives in Albert Lea and his mother in Iowa.

He lives with three other men in a home on Garfield Avenue, which receives staff visits through Crest Services twice a day. He rides public transportation to and from work.

Olson said in his spare time he enjoys riding his bike, bowling and playing video games.