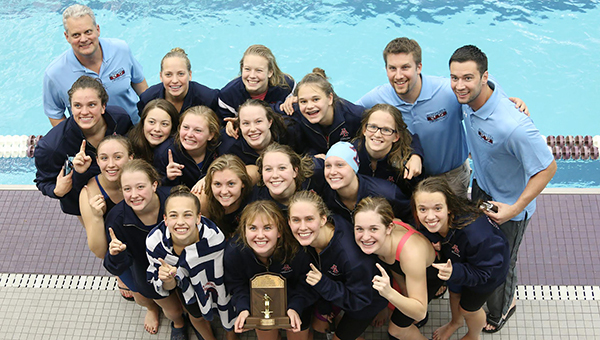 The Albert Lea girls’ swimming team celebrates with the trophy for winning the Big Nine Conference title Saturday at the University of St. Thomas in St. Paul. — Provided

First-place finishes in nine of 12 events — including conference records in the 200-yard medley relay and the 100 freestyle — propelled the Tigers to a title Saturday at the Big Nine Conference meet at the University of St. Thomas in St. Paul.

Albert Lea finished with 389 points, which was 54 more than second-place Rochester Mayo and 124 more than No. 3 Faribault. Mankato West, a team that finished fifth at the Class A state meet last year, took fourth place with 250 points.

In the 100 freestyle, Andersen set the conference record in 51.66 seconds. She beat second-place finisher Megan Gehrke of Faribault by 2.77 seconds and the previous conference record from Mankato West’s Danielle Nack in 2011 by 0.05 seconds.

Andersen and Horejsi were conference champs in all four of their events.

In addition setting the conferences record in the 100 freestyle, and 200 medley relay, Andersen led the Tigers to conference titles in two other relays: the 200 and 400 freestyle.

Bailey Sandon and Ahnika Jensen were conference champs in three events, as were Emily Taylor and Haley Simon in two.

Sandon and Jensen were both part of two gold-medal relay teams and one championship individual event.

Jensen beat Faribault’s Bre Bresnahan by 0.42 seconds to win the 50 freestyle in 24.74 seconds. Jensen was also a part of the Tigers’ 200 medley and 200 freestyle relay teams.