Linda Lee Hernandez, 50, was charged with assaulting a peace officer and obstructing the legal process with force or violence. 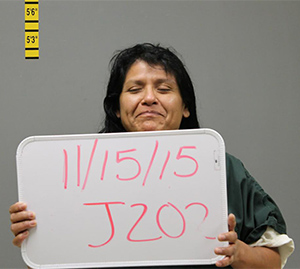 According to charging documents filed Monday, officers were dispatched to the Nasty Habit at approximately 8:59 p.m. Sunday on a report of a disorderly female.

Hernandez allegedly would not leave the area despite several warnings from Freeborn County Sheriff’s Office Patrol Deputy Christina Boardman to step away and allow police officers to handle the situation.

Court files state Hernandez allegedly walked up from behind Albert Lea Police Department Officer Eric Anderson and grabbed the back of his vest. Boardman reportedly again instructed her not to touch the officers and to walk away, but Hernandez then reportedly began pushing her body against Boardman and then struck the deputy in the jaw with her fist.

Boardman reportedly tried to control Hernandez by pushing her against the wall in the bar. Albert Lea Police Officer Sy Vanthavong assisted. Hernandez reportedly fought the officers, twisting and swinging her body around. She was instructed to put her hands behind her back, but she continued to resist and swung her arms, legs and body around, according to the document.

Boardman reportedly noted a red mark on her jaw where she had been punched and suffered a cut on her ring finger.

Hernandez was released contingent on her following court orders.

Her next appearance is scheduled for Nov. 25.

Hernandez faces a maximum sentence of one year imprisonment and a $3,000 fine on each count.

A second woman, Christine Tofson, was arrested for disorderly conduct but wasn’t charged as of Tuesday afternoon, according to the Freeborn County Attorney’s Office.