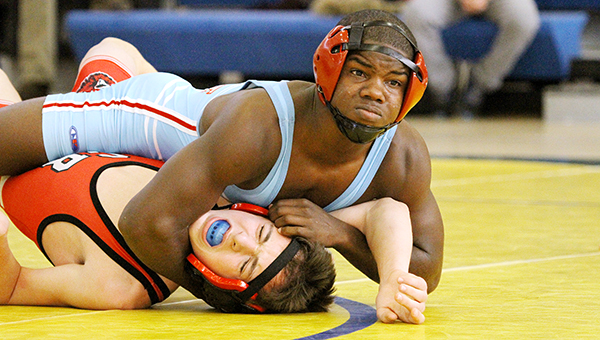 Joe Peterson of Albert Lea wrestles Coon Rapids’ Gabe Degris Saturday at 120 pounds at a tournament at Hastings. Peterson won by fall in 3:42. View a gallery of photos at albertleatribune.com. — Pam Nelson/for the Albert Lea Tribune

The No. 4 Class AA Tigers took down three Class AAA teams and won 29 of 42 individual matches Saturday in a tournament at Hastings.

“Any time you can knock off a ranked team, that’s a big win for us,” said Tigers coach Larry Goodnature. “I was happy with the way the kids competed.”

Against Forest Lake, Albert Lea won its first seven matches to take a 35-0 lead. The Tigers used the same formula by winning the first eight matches to blast Coon Rapids.

In Albert Lea’s win over Prior Lake, the Tigers built a 21-6 advantage and held on by winning the final two weight classes after the Lakers cut their deficit to five points.

Tanner Palmer, who went 3-0 on the day with a pin and two decisions, edged Prior Lake’s Collin O’Brien with a 9-8 decision at 220 pounds. Matt Palmer wrestled his only match of the day at 285 and won by fall in 3:20 against Prior Lake’s Alex Nopola.

“The Palmer boys are going to be anchoring our lineup, and (Matt Palmer) got a big fall in the final match against Prior Lake to seal the win for us,” Goodnature said.

Not only was Albert Lea ranked at the team level in the first polls of the season, the Tigers had three wrestlers — Garrett Aldrich, Zach Glazier and Gavin Ignaszewski — listed in Class AA’s top 10 at their individual weights.

Two-time defending state champion Garrett Aldrich was ranked No. 1 at 126 pounds and he competed at 138. Aldrich won by forfeit against Forest Lake, pinned Vitaliy Bak of Coon Rapids in 1:03 and beat Prior Lake’s Adam Hanson with a 12-3 major decision.

Glazier, a third-place finisher at 106 pounds at state last season, began this year ranked No. 1 at 113 pounds and won both of his matches Saturday at 132. He pinned Matt McClain of Coon Rapids in 2:41 and Theo Smith of Prior Lake in 5:38. Glazier’s fall against Prior Lake was one of two the Tigers had in the match.

“The kids competed well even in the ones they lost,” Goodnature said. “That’s what really pleased me. When we can go out there and not give up the pin or the tech (fall), that can be a win.”

Albert Lea wrestlers who went undefeated at the tournament were Nic Cantu at 106, Joe Peterson at 120, Ryleigh Bure at 126, Aldrich, Brody Nielsen at 145, Tanner Palmer and Matt Palmer.

Last year, the Tigers went 3-0 at the same tournament with wins over Prior Lake, Forest Lake and Stillwater. Prior Lake went on to take third place at the Class AAA state team tournament, while Albert Lea was the Class AA state runner-up.

The tournament’s matches were scheduled beforehand, so each team played three matches without advancing to a title match, Goodnature said.

Next, the Tigers will compete at 7 p.m. Thursday at Faribault.

Goodnature said the Falcons are an improved team, and they most likely will be in the hunt for the Big Nine Conference title with Albert Lea — the defending conference champs — and Owatonna. 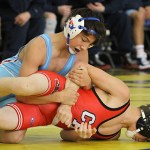 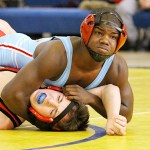 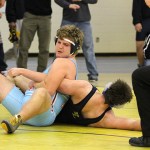 Matt Palmer of Albert Lea wrestles Prior Lake’s Alex Nopola Saturday at 285 pounds at a tournament at Hastings. Palmer won by fall in 3:20. — Pam Nelson/For the Albert Lea Tribune 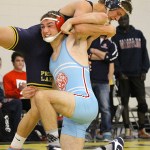 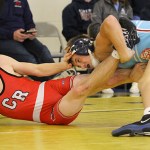