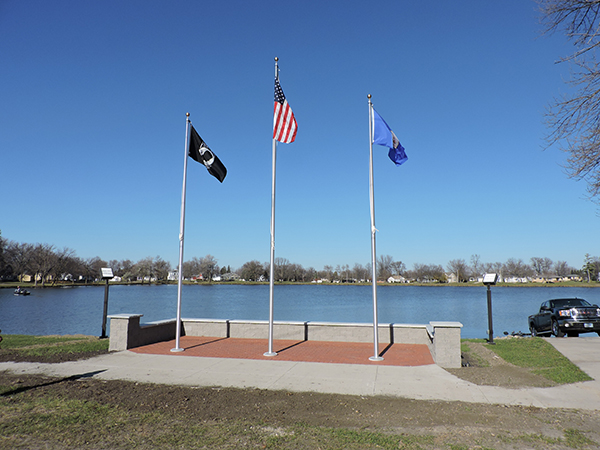 The Community Pride Monument in Alden is located on the south side of Morin Lake and features the state, national and POW/MIA flags. Kelly Wassenberg/Albert Lea Tribune

ALDEN — Sometimes ideas take on a life of their own. So is the case with the new Community Pride Monument in Alden.

The idea for the project started with the donation of $500 to the Alden Lions Club from the family of one of its founding members, Wes Hintz. The family bestowed the donation after Hintz died. However, there was never any specification on where the funds should go.

According to Lion Neil Pierce, the group settled on purchasing a bench, but the idea soon became something more than a project to memorialize one man.

“What one person didn’t think of, the other did,” Pierce said of conversations with his fellow Lions and community members such as Mary Reyerson. 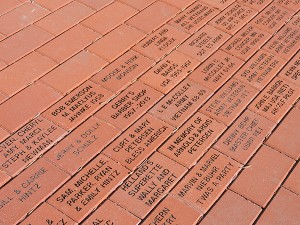 Pavers can be purchased in memory of a loved one, to honor someone’s service in the military or to demonstrate pride in being a part of what makes Alden what it is today. Kelly Wassenberg/Albert Lea Tribune

Pierce and fellow Lion Bill Wittmer, the last two surviving original charter members of the Alden Lions Club, began to look at models of different community monuments after a suggestion was made to add some flags alongside the bench. The idea “mushroomed” from there, according to Reyerson who joined the men in spearheading the effort to make the Community Pride Monument a reality.

Its presence on the south side of Morin Lake now stands as a testament to the success they’ve had so far, but the trio are humble about the work they’ve put into the project.

Wittmer noted it is not one person or organization that is responsible for the monument, but the entire community that came together in support of it. Many Alden businesses made contributions when asked. The city of Alden not only allowed the monument to be placed on city property, it financially contributed to the project and has accepted the responsibility for paying the electric bill for lights that illuminate the flag pole at night. The American Legion donated the United States flag, Minnesota flag and Prisoner of War and Missing in Action flags and the pole on which they fly, while Sons of the American Legion members volunteered their time to install them.

This monument is not just for veterans or even those who have passed on though.

“It’s for anybody who has had or does now have ties to the city of Alden,” Reyerson said.

Her husband, Alden mayor Jerry Reyerson, found it easy to endorse the project for that very reason.

“I supported it because I thought it was a good way to recognize the people of the past and today who have made Alden what it is,” he said.

Pavers are still available and the group will have the bricks engraved sometime in the spring. The funds raised from the pavers will go towards the remaining $5,000 needed to complete the project.

Currently there are about 165 engraved pavers set into the monument. Pierce said this figure accounts for about one-third of the pavers at the site, yet Reyerson was quick to note the monument could potentially expand to accommodate more pavers.

The dedication of the monument could potentially be sometime during Memorial Day weekend; however, those who would like to see the monument are welcome to do so.