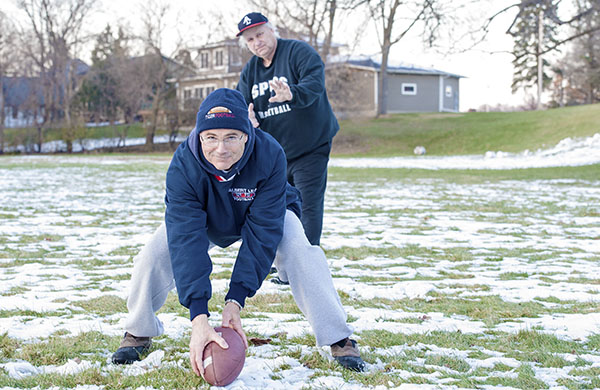 Rick Harves, one of the founding members of the Turkey Bowl, looks to snap the ball to Steve Roche, who has played in the game each year since 1971, Tuesday at lower Abbott Field in Albert Lea. — Micah Bader/Albert Lea Tribune

This is 49th consecutive year for Turkey Bowl

To a group of friends who graduated from Albert Lea High School around the early ’70s, the Turkey Bowl is more than just a game.

“It’s a tradition,” said Steve Roche, a ’71 ALHS graduate, who missed the game with a broken ankle in 1970 but played every year since. “It’s fun, and I always look forward to it. We just enjoy each other’s company, and it’s kept going.”

This year’s edition, Turkey Bowl XLIX, will be from 9 to 11 a.m. Thanksgiving Day at lower Abbott Field.

Today will be the 49th consecutive game, said Rick Harves, one of the founding members, along with Jim Nielson and Paul Wendorff.

“I’ve missed some, and maybe someone else has missed, but there has always been a game,” he said. “The guys always get together.”

Next year, the half-century milestone will be reached.

“That’s been our goal for the last six or seven years,” Harves said. “We’re going to do it for sure. We made our minds up about that a long time ago.”

The highlight of the game for Harves, a ’70 ALHS graduate, is seeing old friends.

“We do a lot of talking while we’re playing,” he said. “That’s when we catch up with each other.”

The game’s origins date back to 1966, when Wendorff, along with his brothers Rich and Jim were told to get out of the house while their mother cooked the holiday meal. A phone call was made to Harves, and the game was born.

Harves, a former elementary school instructor and current long-term substitute teacher at Albert Lea High School, who also coached football for 30 years and softball for 20, was one of only a few players with a background on the gridiron.

“We had a whole mix of guys who played different sports,” Harves said. “It’s more of the togetherness because we were all friends as kids.”

The same “jungle ball” rules that were used the first year remain in place, Harves said. Everyone is an eligible receiver — except on special teams — which means the linemen can get in on the action. The offense has four downs to score, and stops are made with a one-hand touch.

“We try to avoid contact,” Harves said. “There’s a little blocking going on — a little pushing and shoving — but there isn’t anything where something might happen.”

In an effort to avoid injuries, there are no fumbles.

“The ball is dead when it hits the ground, so you don’t have people diving,” Harves said. “We tried to make the game safe that way.”

Weather conditions have been overcome every year. The 1977 season stood out to Harves and Roche, because the field was cleared after a storm with a snowblower.

Friendships are the cornerstone of the event.

“Albert Lea’s a good place to live and raise a family, and it’s about family,” Roche said. “This is kind of like family. Even though we’re not related, we’re family.” 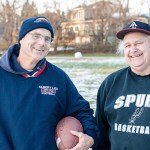 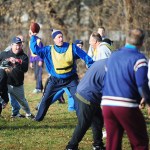 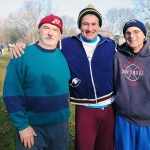 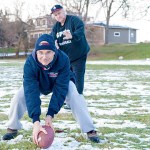 Rick Harves, one of the founding members of the Turkey Bowl, looks to snap the ball to Steve Roche, who has played in the game each year since 1971, Tuesday at lower Abbott Field in Albert Lea. — Micah Bader/Albert Lea Tribune