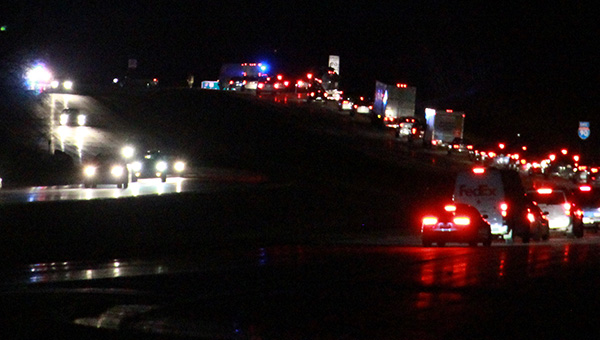 Vehicles slow on Interstate 90 Monday night shortly before 6 p.m. after the road was closed for an anhydrous ammonia leak. – Jason Schoonover/Albert Lea Tribune

ELKTON — An anhydrous ammonia leak caused Interstate 90 to be shut down and some homes to be evacuated Monday night.

Mower County Sheriff Terese Amazi confirmed two 1,000 gallon anhydrous ammonia tanks leaked at the grain elevator on County Road 7 south of Elkton around 4 p.m. As of 6:25 p.m., the tanks were shut off, but an anhydrous cloud was still hovering. 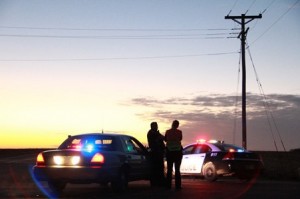 Officers stand near their cars at the corner of 220th Street and 670th Avenue to block off the road for an anhydrous ammonia leak near Elkton on Monday. – Jason Schoonover/Albert Lea Tribune

“Stay off the interstate if you can,” she said.

The interstate has since reopened.

Though the leak started south of Elkton, the cloud had moved north to Interstate 90, and Amazi said it wasn’t dissipating in the low winds.

Shortly after 5:30 p.m., Chief Deputy Mark May confirmed that there was a large anhydrous cloud hovering near the interstate, but the two 1,000 gallon tanks that leaked were being shut off.

Amazi didn’t know how long Interstate 90 would be shut down, and said crews would be taking readings. Amazi said she hasn’t experienced an event like this in her more than 27 years on the force.

“I haven’t had one of these in my career,” she said.

The tanks were about 85 percent full when they started to leak, according to reports. A one-mile perimeter was set up around Elkton earlier in the evening, and homes were being evacuated near the incident.

At one point, officials thought the leak was four 1,000 gallon tanks of the farming chemical, which is a widely used source of nitrogen fertilizer. The  tanks were reportedly owned by Cenex Harvest States.

Look back to the Tribune for more updates as information becomes available.