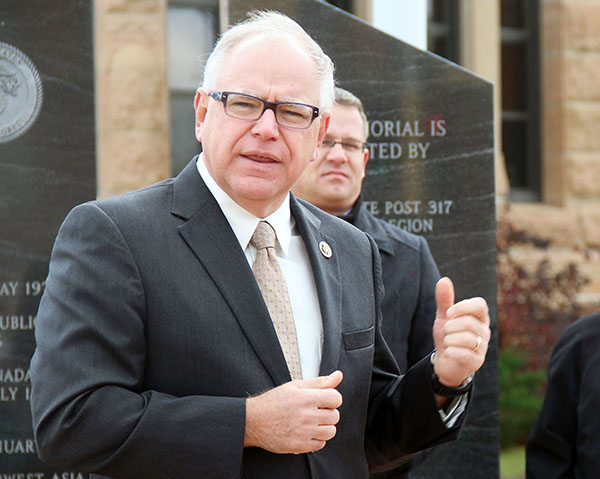 Albert Lea residents and officials gathered Friday outside the Freeborn County Courthouse to celebrate the partnerships behind the U.S. Highway 65 street project. 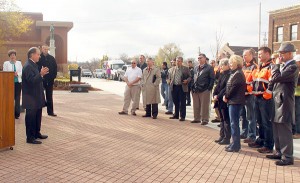 Community members, construction crews and others gather outside the Freeborn County Courthouse to celebrate the U.S. Highway 65 partnership between the Minnesota Department of Transportation and the city of Albert Lea. – Sarah Stultz/Albert Lea Tribune

“This project is a great example of what can be done and should be done,” said Minnesota Department of Transportation Commissioner Charlie Zelle.

The $5.3 million project included the mill and overlay of Highway 65 from Main Street to south of Interstate 35, along with the replacement of sidewalks and other amenities. The road switched from having four driving lanes with two lanes in each direction to having three lanes with one lane in each direction and a center turn lane from Seventh Street north. Bike lanes are on both sides of the street and can act as buffer zones and parallel parking. The project also included the mill and overlay of Main Street from Newton Avenue to St. Mary Avenue.

Zelle said updating a road isn’t simply about the infrastructure of pavement, medians and sidewalks. It’s about making it more livable for people who use it.

The city requested changing the portion of the road to a three-lane highway after the Albert Lea City Council in June voted to do so. The project supports the efforts of the Blue Zones Project for complete streets and greater walkability. 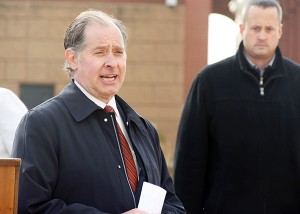 “I know our community is excited about this,  and we’re especially excited to have the barriers come down,” said District 27A Rep.  Peggy Bennett, R-Albert Lea.

Ryan Nolander, executive director of the Albert Lea Economic Development Agency, talked about the increase in economic development North Broadway has seen since it was reconstructed a few years ago. He hopes this development will continue south.

Nolander said prior to 2013, his office didn’t receive any calls about development downtown.

Since, 10 businesses have either moved downtown or renovated their existing space there.

He said while this does not guarantee further development, it can create opportunities.

A few of the leaders commented about the need for sustainable funding at the state level to address the ever-growing road needs across the state.

Zelle said he would have done a complete reconstruction of Highway 65 and recognizes there are sewer and system drainage issues that still need to be addressed.

U.S. House Rep. Tim Walz,  DFL-Mankato, said the failure to pass a highway bill on the national level puts “tremendous” stress on the state and in turn the local governments.