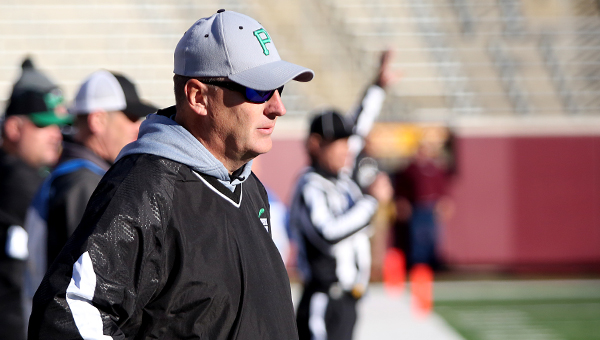 MINNEAPOLIS — Going two straight years without a state title qualified as a drought for Caledonia, and last year’s loss in the state semifinals stuck with the Warriors.

Any disappointment ended Friday with a dominating effort in this year’s Class 2A championship. 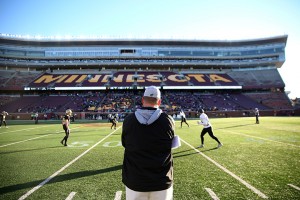 Clay Anderson, who coached the Albert Lea football team for six years, coaches Pipestone Friday in the Class AA championship game against Caledonia. Anderson and the Arrows fell 40-0 against Caledonia. The loss comes after a previously undefeated 13-win season. Pipestone qualified for the title game with a 39-9 win over United North Central in the state semifinals. — Jesse Trelstad/Worthington Daily Globe

Owen King’s three first-half touchdown passes helped Caledonia take control early on the way to a 40-0 win against Pipestone Area in the Class 2A state championship on Friday at TCF Bank Stadium on the University of Minnesota campus.

“Ever since last year and we lost, that just motivated us throughout the entire offseason,” Warriors senior running back Sam Stemper said. “Throughout even other sports, you’re still thinking about football. We’ve been waiting for this day for a long time. If you would have asked us during the summer if we were going to win state, we would have said, ‘Yes.’ That was just our mentality. We like not losing.”

Caledonia hasn’t been used to losing much in recent years.

King, just a sophomore, was 13-of-20 passing for 207 yards and four touchdowns. Stemper added 172 yards rushing and two touchdowns for the Warriors (14-0), who won their seventh state championship and sixth in the past nine seasons.

“We never dictate, ‘This team is better than any other team we’ve ever had,”’ Caledonia coach Brent Schroeder said. “It’s different opponents. We’re just so proud of the way they jump into the brotherhood. . They’re all equal, state championship or not.”

Caledonia left little doubt this season would end with a title.

The Warriors led 33-0 at halftime and didn’t allow any first-half points all season. Pipestone Area lost three fumbles in the first half as Caledonia outscored its opponents 131-6 in three state tournament games.

The Arrows had gone 13-0 leading up to Friday’s title game with a rushing attack averaging 288.4 yards per game. But Pipestone Area was without two of its three leading rushers on Friday and was held to just 56 yards rushing.

“I think the speed of their defense was the biggest thing,” Arrows coach Clay Anderson said. “I think we can block them, and we did block them at times, but they come off blocks and they go all the way around. They’re a nice ball club.”