Funeral services for Clifford Russell Olson, 87, of Hartland will be at 2 p.m. Saturday at Cross of Glory Lutheran Church in Hartland. The Rev. Mark Hillmer will officiate. Interment will be at Hartland Cemetery. Military honors will be accorded by local servicemens organizations, Veterans of Foreign Wars and the American Legion. Visitation will be one hour prior to the service at the church. Online condolences are welcome at www.bayviewfuneral.com. 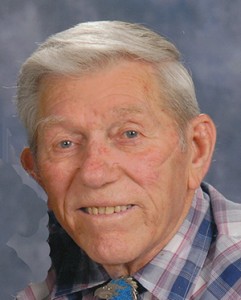 Clifford died Tuesday, Nov. 10, 2015, at his home peacefully surrounded by his family.

Clifford Russell Olson, the son of William Oscar and Bertina (Sibilrud) Olson, was born April 8, 1928, in Hartland. Clifford grew up and attended school in Hartland. He served his country in the United States Army during the Korean War. On Feb. 8, 1958, he was united in marriage to Mildred Elizabeth Johnson at First Lutheran Chapel in Albert Lea. Clifford worked for Ulland Brothers as a crusher operator. He was a member of Cross of Glory Lutheran Church, the Eagles and American Legion for 63 years. Clifford was a volunteer firefighter for 20 years. He enjoyed reading, collecting coins and spending time with family and Uncle Joe.