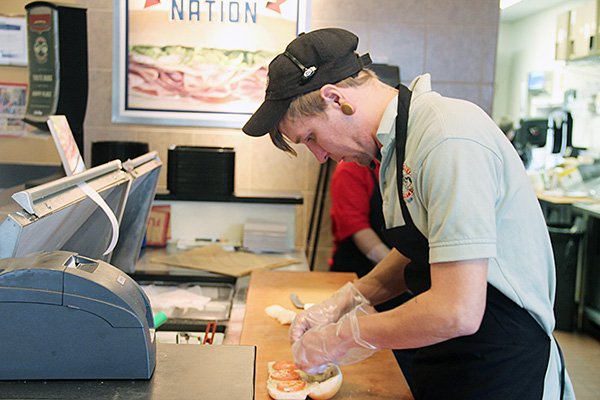 Albert Lea’s Erbert & Gerbert’s is making big waves — across the city and the country.

Last month, the company was awarded Medium Business of the Year at the annual Albert Lea-Freeborn County Chamber of Commerce annual celebration.

“Of all the businesses I saw up there, it’s definitely an honor,” said Kurt Wallace, who owns the the store with his wife, Alicia.

He and General Manager Kelly Anderson credited the business’s success to the company’s 10 employees. 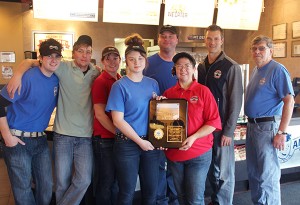 Erbert & Gerbert’s opened in August 2012. Wallace said he had to persuade the Erbert & Gerbert franchise officials to let him and his wife open the store in Albert Lea, as the city does not have the typical demographic the company likes to see when opening stores.

He said after much convincing, the Erbert & Gerbert’s franchise system gave him and his wife permission to open the store in Albert Lea.

Since opening, the store has seen much success, even on a national scale.

It has won various awards including Rookie of the Year, Operational Excellence, the Marketing Award of Distinction and Increase in Single Sales Award. One of its employees was named Second Fastest Sandwich Maker in the Nation.

“We’ve come a long way from them not even wanting to come to Albert Lea,” Wallace said.

Anderson has qualified for the President’s Club. The award recognizes the top general managers by presenting them a trip on a tropical vacation. The general managers must be in the top 25 percent of all stores in food cost performance and complete other criteria.

In addition to all of its recognition, Erbert & Gerbert’s is making a concerted effort to get involved in the community. 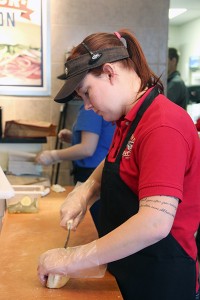 Employees from the company volunteer at the fun nights at area elementary schools and donate to many groups in need in the community.

The business donates its day-old bread to the Salvation Army, donated soup for an event at Youth for Christ’s The Rock and developed a reading program with the five elementary schools in the area. Once students read 10 books and the teacher signs off, a student can receive a free children’s meal.

The business has had charity events, where it raises money for various local organizations.

The nomination form that the business submitted for the chamber award states the company strives for excellence in customer service and has retained nearly half to the employees they opened the store with over three years ago.