By Jenae Hackensmith and Jason Schoonover

AUSTIN — In the weeks leading to his death, David Madison reportedly told people he feared Michael Francis McIntosh wanted to harm him.

Court documents released Monday outline new details surrounding Madison’s homicide, including that tension between the men stemmed from Madison sleeping with McIntosh’s girlfriend while McIntosh was in jail for prior charges. 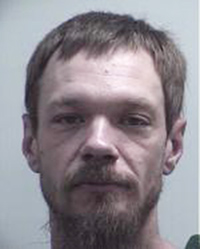 McIntosh, 37, was charged Monday with second-degree intentional murder in the killing of the 39-year-old Madison, whose body was found Nov. 1 in the Cedar River along Highway 105 south of Austin.

Mower County deputies arrested McIntosh on Friday, and he appeared in court at 11 a.m. Monday for an initial appearance. McIntosh is being held on unconditional $1 million bond or $500,000 bond with conditions. McIntosh faces a maximum penalty of 40 years in prison if convicted.

Deputies narrowed McIntosh down as a suspect early in the investigation, and Sheriff Terese Amazi said McIntosh and Madison had at one time been friends.

McIntosh was arrested Friday at the Mower County Jail and Justice Center during a check-in for a separate, meth-related case.

According to the court complaint:

Madison, 39, was killed over Halloween weekend, and his body was discovered the morning of Nov. 1 along Highway 105 south of Austin near the intersection of the Cedar River and Orchard Creek.

A medical examiner confirmed Madison’s death was a homicide from head trauma and strangulation, and the examiner also found his head injury would have bled profusely.

Investigators discovered Madison was last seen alive at a home on the 2000 block of Fifth Avenue Northeast in Austin early on Nov. 1. He’d left his car there to go to the bar but returned briefly before leaving and left his keys at the residence.

Madison was reportedly engaged in a relationship with McIntosh’s 38-year-old girlfriend when McIntosh was in jail for prior charges. McIntosh was released from jail on Oct. 29, and Madison had told several people he feared McIntosh intended to harm him upon his release.

McIntosh admitted to law enforcement on Nov. 4 that he had confronted Madison for stealing his property and sleeping with his girlfriend, a confrontation he said was nonviolent and happened at an Austin home. McIntosh also provided a timeline of his whereabouts and people he was with the morning of Nov. 1. However, investigators found that McIntosh bought a cleaning agent in a spray bottle and garbage bags early on Nov. 1 at Walmart.

On Nov. 4, officers went to talk to the girlfriend at a home on the 400 block of South Main Street. A sign on the front door directed them to a back door, and officers were walking to the back door when they observed paper towels and a half-gallon bottle of bleach in the back seat of a 2004 Ford Taurus. They also observed small, red stains in the front seat along with tire irons and what appeared to be the handle of a hammer.

After obtaining a warrant, investigators searched the house and found cleaning supplies and bleach in the kitchen. The refrigerator was particularly clean, while the rest of the house was a mess with debris and dust.

Several blunt objects were found at the scene, including a pipe-wrench, a hammer, a bed leg shaved to look like a club, and an expandable baton, which was bent. They found a pair of jeans with a dark stain similar to a blood stain and a hat with caked mud similar to the riverbank where Madison was found.

In the early hours of Nov. 1, two other couples became involved in the situation. The couples and the girlfriend eventually provided accounts to law enforcement of the situations following the alleged murder.

On Nov. 5, investigators further questioned the girlfriend, who said she was asleep in the South Main Street home early on the morning of Nov. 1 when she awoke to hear a loud thud downstairs at around 2 a.m. Within a minute, McIntosh came up and told her not to go downstairs. She told police McIntosh took her downstairs and out the front door to be driven to an acquaintance’s home, but purposefully kept her from the kitchen. She said one of the couples then drove her to another couple’s residence. McIntosh did not come with them but joined them later at the residence.

However, one of the women reportedly told investigators McIntosh called her and her boyfriend to ask them to come over the morning of Nov. 1. They entered the back door and the woman immediately saw a body on the kitchen floor with blood on its head, but she didn’t want to look further. She initially thought the body was McIntosh because he’d sounded distraught on the phone, but she reportedly saw McIntosh in the kitchen wearing only sweatpants holding a bed or chair leg fashioned like a club with tape on one end for a grip. McIntosh was allegedly agitated and said he didn’t know what to do.

One of the witnesses said she could hear Madison breathing and then went upstairs to find the girlfriend on her phone reading messages she and Madison had exchanged earlier. The last message said something like “I am here,” but the witness suspected some messages may have been deleted. Eventually, the witness said the girlfriend left with one couple, leaving McIntosh alone at the residence. They went to the couple’s home, where McIntosh joined them about 90 minutes later.

One of the men provided a statement to police that matched one of the women’s statements to law enforcement. He reportedly confirmed Madison was still breathing when they left the residence as McIntosh was preparing to move Madison from the kitchen.

No emergency calls were made for aid and no attempts were made to take Madison to the hospital, according to the complaint.

One witness said the group all met later at a house, where McIntosh reportedly apologized to them for getting them involved. During the discussion, one woman reportedly questioned McIntosh about whether he’d killed Madison, and she questioned if his girlfriend was sleeping with Madison. McIntosh did not admit to anything, but the girlfriend reportedly admitted to the relationship. One of the women said McIntosh’s girlfriend had told her there was blood McIntosh had missed above the refrigerator of South Main Street home.

On Nov. 5, the Minnesota Bureau of Criminal Apprehension crime scene team investigated the South Main Street home, finding more than 40 spots that tested presumptively for blood in the kitchen, back doorway and back steps.

The investigation is still ongoing, and law enforcement is asking anyone with any information to call 507-437-9400.