Donald George Hope of Austin passed away on Sunday, Nov. 1, 2015, at St. Mark’s Lutheran Home after a lingering illness. He was 85.

Donald was born June 29, 1930, at home in Freeborn County, the son of Theodore and Mary (Hjelman) Hope.Don attended District 1 Country School and graduated from Blooming Prairie High School in 1948. On June 24, 1953, he was united in marriage to his wife of 62 years, Janet Sauke, in Geneva. The couple raised two children, Randy and Lyn. A lifelong dairy farmer and avid Minnesota sports fan, Don was also a member of the Newry Township board and Community Lutheran Church in Geneva, where he served on the church council. Bowling and gardening were two of his favorite pastimes. After retirement, Don was happiest helping other farmers and spending time with his grandchildren. He lived his 85 years in the same house where he was born. 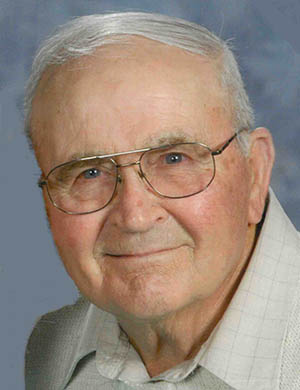 Donald is survived by his wife, Janet Hope, of Austin; daughter, Lyn (Mike) Bolster, of Kasson; son, Randy (Rosalyn) Hope, of St. Paul; four grandchildren, Sam and Margaret Hope and Brennan and Ben Bolster. He was preceded in death by his parents Theodore and Mary Hope; his brother, Russell Gilde; and his sister-in-law, Eva Gilde.

A memorial service will be at 11 a.m. Friday at Community Lutheran Church, 106 Third St. SE in Geneva. The Rev. Kristen Venne will officiate. Visitation will be from10 to 11 a.m., immediately preceding the service. Interment will be in Geneva Cemetery. Memorials can be directed to Geneva Community Lutheran Church or to the donor’s choice. Worlein Funeral Home of Austin is assisting the family with arrangements. Condolences may be expressed to the family online at www.worlein.com.