He was born July 3, 1924, in Albert Lea to Nordahl and Mabel (Nelson) Nelson. He grew up in London, Minnesota, above his family’s general store and post office, and attended Lyle High School. He met Shirley Mae Bird at Luther College in Decorah, Iowa, and they married in 1946 after his graduation. They moved to St. Louis, raising seven children, and their love flourished for 68 years. He worked as a chemist at Mallinckrodt Chemical Co. for 41 years, first in the uranium division and later in stearate applications, retiring in 1988. 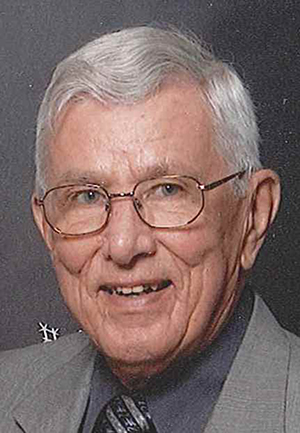 He was a devoted husband and father, spending countless hours at his children’s and grandchildren’s events. A great sports fan, he played baseball, football and basketball in high school and college and was a lifelong St. Louis Cardinals fan. Camping and canoeing were frequent activities with family, and he taught his children and grandchildren fly fishing. He had a wonderful sense of humor and an easy smile. In spite of his declining health, he continued playing and winning cribbage and gin rummy games with family until his death. He enjoyed maps and planning travel to several continents and across the United States and Canada to visit family and national parks — although he always ended the trips with some version of, “Phew, we got that over with!” He encouraged independent and critical thinking, exercised during lively, respectful dinnertime conversations. As his children’s academic interests and careers diversified, he kept up in a variety of fields, clipping articles to share with them from his chemistry journals. After all, everything is chemistry.

Kind and genuine, he lived a life of service. He was never happier than when he was doing something for someone else. He served faithfully on many church councils and social action committees in St Louis. He never had the loudest voice in the room, but always was a voice of reason and compassion and was well regarded by all. In 2003 he and Shirley moved to Red Wing and joined First Lutheran Church. He continued to be a volunteer driver for Faith In Action until health concerns prevented further service.

He was preceded in death by his wife, Shirley, in June, 2014; his parents; brothers David and Stanley; sister-in-law, LaVine; brother-in-law, Ronnie Bird; and three grandchildren, Katrina, Nicole and Dane.

A memorial service will be at 2 p.m. Nov. 17 at First Lutheran Church in Red Wing. The Rev. Arte Sharot will officiate. Visitation will be for one hour prior to the service at the church. Memorials are preferred to the local United Way, Bread for the World or donor’s choice.  Arrangements are by the Mahn Family Funeral Home, Bodelson-Mahn Chapel. Online condolences may be sent to the family at www.mahnfamilyfuneralhome.com.