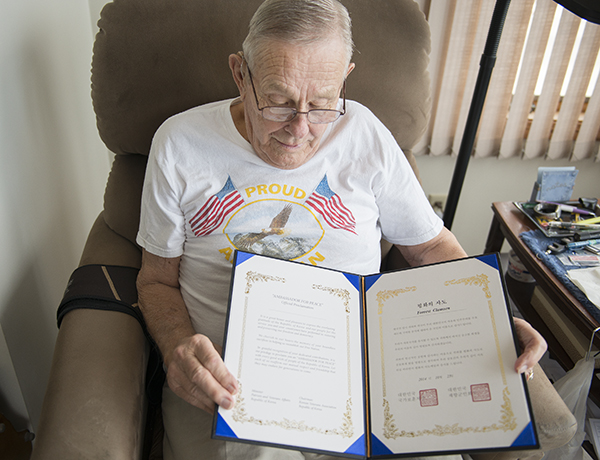 Forrest Claussen is a Korean War veteran. He went back to what is now the Republic of Korea — also referred to as South Korea — in 1995 and 2000 on an invitation from the South Korean government. The invitation was meant to show appreciation for the American military’s services during the war. – Colleen Harrison/Albert Lea Tribune

Two local veterans will spend their Veterans Day out in the community helping others.

Tom Neyers and Forrest Claussen — as well as other veterans and volunteers — will sell forget-me-nots at Hy-Vee and Marketplace Foods today to fundraise for Disabled American Veterans, an organization that both men are active in.

Neyers, 69, joined the U.S. Navy in 1964. Originally from Sleepy Eye, Neyers was stationed down in Jacksonville, Florida, and was on the USS Bigelow working as an electrician’s mate.

In 1967, close to the peak of the Vietnam War, Neyers was deployed to Vietnam from February through September. The Vietnam War was a long, costly armed conflict that pitted the communist regime of North Vietnam and its southern allies, known as the Viet Cong, against South Vietnam and its principal ally, the United States.

Neyers said outside of his immediate family, not many knew he had served in the war, making his return home relatively quiet and uneventful. He said he didn’t talk about it much as he felt he didn’t withstand as much trauma or cause for post-traumatic stress disorder, compared to others who served.

While Neyers said he didn’t return from the war with as much psychological scarring as other soldiers, he did come away with residual health effects. Neyers has had a number of heart problems — including a heart attack, triple bypass surgery and the placing of an implantable cardioverter defibrillator — that he said are a result from his exposure to Agent Orange, one of the herbicides used by the U.S. military as part of its herbicidal warfare program in Vietnam. According to Neyers, the Veterans Affairs system didn’t officially recognize a connection between the chemical and heart problems until around 2010.

Claussen, a Korean War veteran, has had his share of medical complications with the VA as well.

Claussen, 84, enlisted in the U.S. Army on March 5, 1951. Originally from Twin Lakes, he said part of the reason he enlisted was because he had been told he would be drafted soon after.

“There was a war going on, and I figured I had a job to do,” he said. “I didn’t think someone else should do it for me.”

The Korean War began when some 75,000 soldiers from the North Korean People’s Army crossed the 38th parallel — the boundary between the Soviet-backed Democratic People’s Republic of Korea to the north and the pro-Western Republic of Korea to the south. The invasion was the first military action of the Cold War, and American troops entered the war on South Korea’s behalf.

Claussen spent basic training in Hawaii, before he was sent to Yokohama, Japan, with his battalion of about 1,200 soldiers, which he said was broken down into divisions once they reached Japan. Claussen said he and his fellow soldiers all knew where they would eventually be going.

“There was no doubt in our minds what we were headed for,” he said.

Eventually Claussen was put into the 39th Field Infantry Division as a cannoneer. His job entailed loading and firing ammunition — something he said he and his division had not been trained to do prior to his time overseas.

Claussen’s first introduction to Korea was in the city of Seoul, and from there he said his division worked its way north toward Chorwan, which was past the 38th parallel in North Korean territory. While Claussen said he recognized the reasoning for U.S. involvement in the war, he felt its troops were not as prepared for it as they should’ve been.

“When we went over to help, it was a great thing,” he said. “But we were not prepared for it. Not at all.”

Claussen said the majority of his battery’s resources — from food to weapons and artillery — were left over from World War II and, in many cases, falling apart.

Eventually Claussen returned stateside, and on March 4, 1954, he was discharged in Fort Collins, Colorado.

Claussen’s medical complications stem from his eardrums bursting while firing off rounds of shells during his time in Korea. His hearing never returned, and he has had to use special hearing aids ever since. He said he has tried to see specialists over the years to help find different ways to treat his condition but has run into insurance coverage complications each time.

In 1995 and 2000 Claussen returned to what is now referred to as the Republic of Korea — or South Korea — at the invitation of the Korean government. Both times Claussen said he and his fellow veterans were greeted by Korean civilians and officials with incredible appreciation, from people bowing when passing them on the street to being given medals of appreciation.

“They were thanking us. They felt we had given them back their country,” he said. “It was very humbling.”

Both Claussen and Neyers are involved in local veterans organizations, including the American Legion, VFW and DAV. The two men both said that Albert Lea and its surrounding areas have a strong, closely-knit veterans community, and said that community would like to see more of the current generation of veterans getting involved. Neyers said the organizations can be an outlet and support system for those returning from Afghanistan and Iraq.

“We’ve been there,” he said. “We’ve done that and seen the same things.” 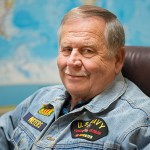 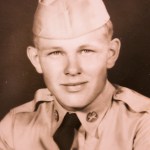 A photo of Forrest Claussen during his time serving in the U.S. Army during the Korean War. -Provided 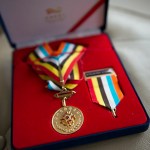 On one of his return trips to the Republic of Korea, Forrest Claussen was given a medal of appreciation by the Korean government, along with other Korean War veterans, to thank them for their service. -Colleen Harrison/Albert Lea Tribune 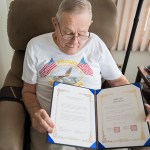 Forrest Claussen is a Korean War veteran. He went back to what is now the Republic of Korea — also referred to as South Korea — in 1995 and 2000 on an invitation from the South Korean government. The invitation was meant to show appreciation for the American military’s services during the war. – Colleen Harrison/Albert Lea Tribune