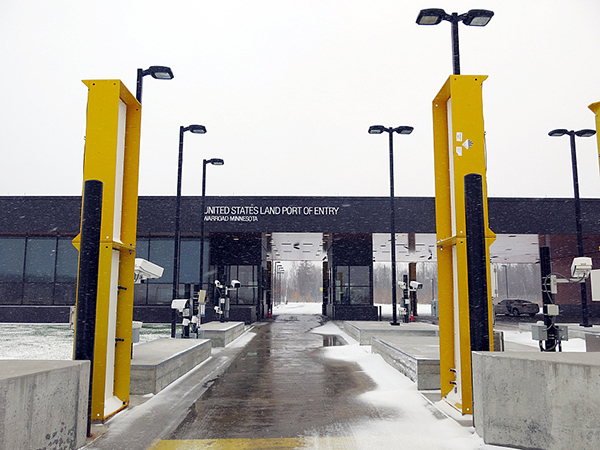 These yellow pillars scan incoming cars for radioactive material at the U.S. Port of Entry near Warroad. The devices were installed after 9/11 to catch potential dirty bombs, but usually flag cancer patients returning from radiation treatments. –
John Enger/MPR News

As Canada plans to resettle thousands of Syrian refugees, those who regularly cross Minnesota’s northern border are hoping alarm over border security won’t lead to hassles.

Canada pledged to resettle 25,000 refugees by the end of the year. Meanwhile, U.S. border security concerns are heightened following the Paris attacks and an ongoing political debate over admitting Syrian refugees.

But there are no calls for more security in Warroad — one of Minnesota’s busiest 24-hour border crossings.

A steady stream of Canadian workers commute back and forth to the nearby Marvin Windows factory. About 1,000 people in 400 cars travel through the Warroad crossing on winter days, with twice that many making the trip on holidays, according to Brian King, Warroad’s port director.

“I can’t comment on staffing levels,” King said, “but I can say we’re doing the same things we were doing before these recent world events.”

Crossing over the border takes between two and three minutes for most travelers. It’s pretty easy even after security was bolstered after the 9/11 terrorist attacks, and locals want to keep it that way.

“People don’t think about the border much up here,” said Valerie Spaur, a cashier at the Holiday Gas station, just 6 miles south of the border. She said the border is just part of life in Warroad.

About half her customers drive down from Canada. A quick border crossing, she said, is well worth it for nearly half price gas and smokes.

Spaur said tighter security on the border would impact a lot of people. Right now, she said, a trip to Canada and back is easy. She hopes it will stay that way.

“Look around,” she said, pointing out the window at flurries of snow and skidding pickup trucks. “I don’t think any terrorists want to come here.”

Raymond Desjardins lives in Vassar, Canada, but works at Marvin making windows. He likes his job, and likes filling his Pontiac with cheaper American gas.

After 15 years of daily crossings, he said the border works as it should.

“It all depends what you have in your car,” he said. “If you follow the rules it’s just another stop. If you don’t, you get caught and go to jail.”

It’s not hard to follow the rules, Desjardins said, but things used to be even easier. When he first started with Marvin Windows, he said the border was wide open. That was shortly before the attacks of 9/11, before the Border Patrol built gates across all the back roads that used to snake unwatched between the U.S. and Canada and before radiation scanners became standard issue at ports of entry.

How security has changed

Warroad Port director King remembers pre-9/11 security well. When he was working at the Pembina, N.D., crossing in the 1990s, he said, Canadian travelers didn’t even need a passport, and he wasn’t actually required to record their name. He could just let them through if he felt like it.

Things are different now at the 30,000 square-foot Warroad border crossing station. When entering the U.S. from Canada, drivers pull between a set of yellow pillars that scan the car for radioactive isotopes that could be used to create nuclear weapons.

Cameras take photos of the license plate and the driver’s face. The photos are run through a series of databases and saved for future reference. By the time the vehicle stops, border guards likely know who is crossing.

Once through the gates travelers from Canada and the U.S. must hand over a passport and answer a few questions. Things like “Do you have more than $10,000 in the car?”, “Are you transporting narcotics?”, and “Do you have a criminal record?” Easy questions to answer if you don’t have those things.

Travelers from many other countries might also need a visa.

The radiation scanners, cameras and routine database searches were some of the changes put in place after 9/11. Some crossings, Kings said, have X-ray machines to speed up vehicle searches. His crew has to use arthroscopic cameras to look inside gas tanks and spare tires. That takes a lot longer, so only a handful of cars are searched each day.

“We don’t search everyone,” King said “It wouldn’t be practical.”

These post 9/11 procedures have a large cumulative effect along U.S. borders. King said U.S. Customs and Border Protection seizes 6 tons of illegal drugs at ports of entry every day, and identify more than 100 national security concerns among nearly one million travelers.

But very little of that action goes on at Minnesota’s eight Canadian border crossings.

There are a few holding cells at the Warroad facility that aren’t used much. In his decades long career, King has had to draw his sidearm, but never had to use it.

And those huge yellow radiation scanners — they haven’t found any nefarious radiation since they were installed. When they do go off, usually it’s because a cancer patient is driving through after a radiation treatment.

In Montana, Reuters reports some residents and border agents expressed concern about the porous border and security threats.

Although King said he can’t predict future Homeland Security directives, he doesn’t see how much more he could tighten security. His border agents are armed, well trained and equipped with high-end technology. King said they’re always watching for threats. In Warroad, most of the time they see people like Raymond Desjardins going to work.