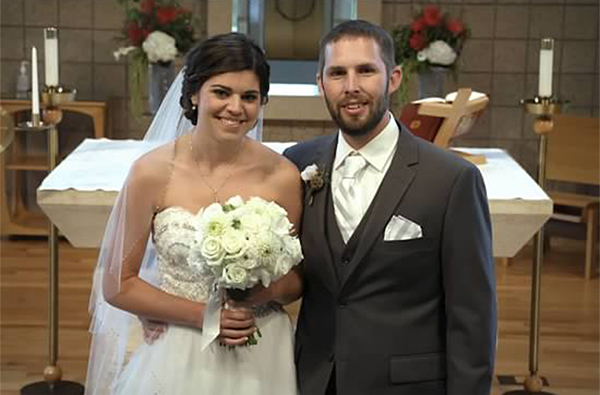 Kristin Feuerhelm and Mitchell Wenum, both of Austin, were married at 2:30 p.m. Aug. 8, 2015, at St. Charles Borromeo Catholic Church. The Rev. Kurt Farrell officiated the double ring ceremony. A reception followed the ceremony at Somerby Golf Club in Byron.

Brooke Hamm of West Des Moines, Iowa, served as the matron of honor. Bridal attendants were Sarah Wenum of Rochester, sister of the groom; and Ashley Trettin of Kansas City, Missouri, friend of the bride.

Adam Pitzen of Edina, cousin of the groom; and Zach Heimer of Cresco, Iowa, served as ushers.

Musicians were Janet Smith, godmother of the groom; and James Wolter, friend of the bride.

Kathy Phillips, aunt of the bride, served as the bride’s personal attendant.

Readers were Kathy Heimer, aunt of the groom; and Matt Feuerhelm, uncle of the bride.

The groom is the son of Gordy and Deb Wenum of Albert Lea and the grandson of Albert and Shirley Smith of Adams and the late Palmer and Genevieve Wenum of Spring Valley, Wisconsin.

The bride is a graduate of St. Charles High School and the University of Northern Iowa in Cedar Falls, Iowa. She is employed with Stewartville Public Schools.

The groom is a graduate of Albert Lea High School and Iowa State University in Ames, Iowa. He is employed with the city of Austin.