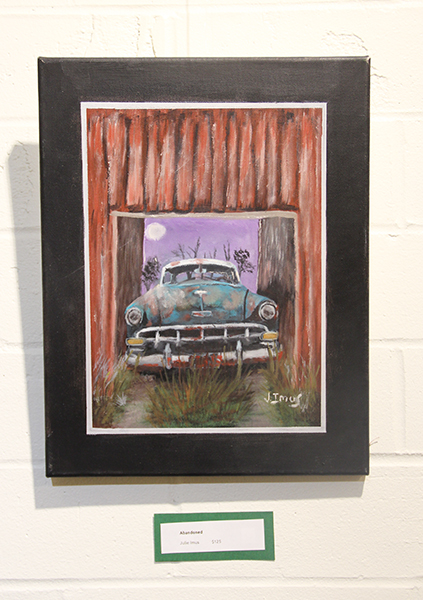 The Freeborn County Arts Initiative is celebrating its first full year of arts programming in its upgraded gallery with an all-member art exhibit that runs until Christmas.

The show, at 224 S. Broadway, started the second week in November and is open to the public.

It features the work of several members, including some artists who were highlighted in exhibits earlier this year. Susanne Crane, president of the Freeborn County Arts Initiative, noted the repeat artists will showcase work that was not featured in previous shows.

“The all-member show is a thank you to the members — a celebration of what we’ve done this year,” Crane said. “The artwork is diverse and high quality and there are real deals to be had for the art connoisseur.”

She encouraged the community to come check it out. The art will be available for purchase. 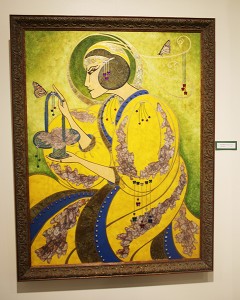 “Queen Maeve” by Teita Amberg is one of several pieces of art on display at the Freeborn County Arts Initiative’s all-member show. – Sarah Stultz/Albert Lea Tribune

Crane said the Arts Initiative has seen much success this year and noted the collaborations that took place with the Freeborn County Humane Society, local businesses, Kid’s College and other professional artists.

The gallery itself has been outfitted with new floor and lighting, and there are renewed walls and a new office.

A new sign, designed by Elisha Marin and TicToc Digital Printing, was installed recently on the front of the building.

Crane said there are several exciting things planned for 2016, including a show about aerial photography, a show about animals and vegetables and other shows titled, “Going Places” and “This Show Rocks!”

She said she is pleased with the support the Arts Initiative has received.