Habitat for Humanity and Riverland partner for homes 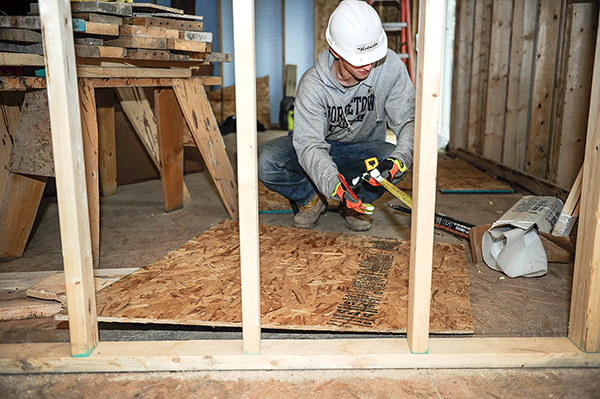 Micah Petersen measures some plywood for cutting during a remodel project for a Habitat for Humanity house. Eric Johnson/Albert Lea Tribune

“You look around and you see how many busy people there on site today, and this is four days a week that we have this kind of work going on,” Fisher said. 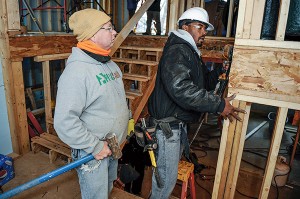 For many years, Habitat for Humanity relied on the work of volunteers for building its houses and often had to hire construction contractors to help lead the work. By the end of a project, Fisher said volunteers were spread pretty thin by the work required.

“We really have struggled with that in the past, with having enough volunteer labor so that we’re not exhausting the volunteers we do have,” she said.

Habitat also had to hire construction contractors to help lead the work, but now Riverland is taking the lead and building the house.

In past years, Riverland students have helped Habitat when they could, but students also built their own house, which they’d sell at the end of the year.

Predominantly, Riverland carpentry students are building the house, but some electrical program students help as well for about 16 total students working on the program.

The college started the project Aug. 24 with several days of demolition on the site before eventually starting construction in mid-September. 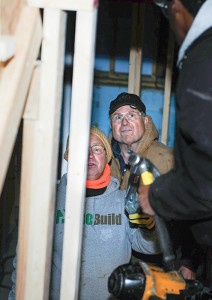 Frank Fryer, a former employee with Habitat for Humanity, still volunteers his time to the organization. — Eric Johnson/Albert Lea Tribune

Second-year students started the work by laying concrete and completing foundation work, while first-year construction students have gone through safety training and are learning the basic carpentry, roofing and siding work involved in the build.

The house is a split level, which is one of only a few that Habitat has done, but Riverland carpentry instructor Walt Alms said the split-level design works well with his students’ needs, as it’s a starter level design but includes two stairwells to build in the entryway and enough square footage on the two levels.

Alms said building a house is a perfect learning tool for the students.

“It’s a great house for us for what we need to be doing,” said Alms, who added it’d be costly and complicated to duplicate the same work at the college.

Alms and Tom Wilker are the two carpentry instructors working on the project, and Alms guessed students complete construction work for about 20 to 25 hours a week with about five hours of class time each week.

Riverland’s carpentry program dates to the 1950s, but Alms estimated they started building a house each year as part of the program in the mid-1970s.

For Riverland, the college now doesn’t have to spend as much money on supplies and financing for the house; those come through Habitat. With budget constraints and a dip in enrollment, Alms said it means the carpentry program and college don’t have to put up financing and the risk that came with eventually selling the house. But that also takes away the potential for future profit.

But Alms said it’s still a good fit for the college.

“It’s an excellent opportunity for the students to see a home being built from start to finish,” Alms said. “It’s been a very good, positive project for us this year.” 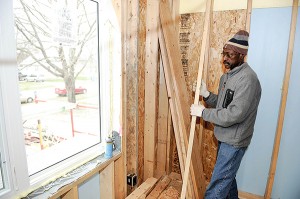 Gabait Nagid cleans up at a home at 1206 Ninth Street NE that will ultimately be his. Riverland students are currently rennovating the home through a partnership with Habitat for Humanity. — Eric Johnson/Albert Lea Tribune

Riverland has had to ensure that it’s taking the lead and that Habitat volunteers aren’t completing work that the students would need to do as part of their learning process. For example, if students need to learn to hang doors, they’d be in trouble if a volunteer completed that work over a weekend.

“We sort of restrict how much volunteer help we get because we need to have training projects for each of the areas for the kids,” Alms said.

However, volunteers are often on site helping with the project. Fisher remembered one experienced volunteer coming recently to the site, who ended up helping the students out and giving them tips.

“It’s really cool to see everybody work alongside of each other so well,” she said.

Habitat typically builds one house a year. Along with 22 homes in Austin, it has also built 12 in Albert Lea.

This is the first year Habitat has built a garage, which Fisher said they’ve never done before because of the cost and Habitat’s need to keep houses affordable.

Now that Habitat is further partnering with Riverland, they don’t have to contract out for additional cement work, which would have increased build costs. Riverland was looking for a chance for students to gain experience laying cement.

“Our cost was minimal to add this garage,” she said.

Typically, Habitat does houses with a full basement, which cost somewhere around $80,000 to build. This house will cost about $90,000 to $100,000, but it’s a bit up in the air since this is their first year building the home through this partnership.

Fisher said Habitat strives to keep houses affordable, and the mortgage cost needs to be under 30 percent of the family’s total income.

Most of Habitat’s funding comes from donations, grants, the United Way, The Hormel Foundation, the Austin Area Foundation, area churches and individual donors.

Habitat picks families with a need and an ability to pay. Fisher said one of Habitat’s key goals is to address the need for housing, and most new homeowners it works with live in some form of substandard housing, whether it’s due to overcrowding, poor plumbing or heating, or mold.

But applicants have to be willing to partner, and each applicant has to complete 250 hours on the project — so a husband and wife have to complete 500 hours.

Gabait Nagid and Nasra Damin will own the home. They currently live in Albert Lea, but they will be moving to Austin, where Nagid works at Quality Pork Processors.

Both Fisher and Alms said they hope the Riverland/Habitat partnership continues into the future.

Fisher said it’s been a learning curve for the first year working with Riverland, but she said the instructors understand Habitat’s vision.

“Everybody at Riverland is on board with the mission of Habitat and working with us to make sure we’re keeping the cost where it needs to be,” she said.