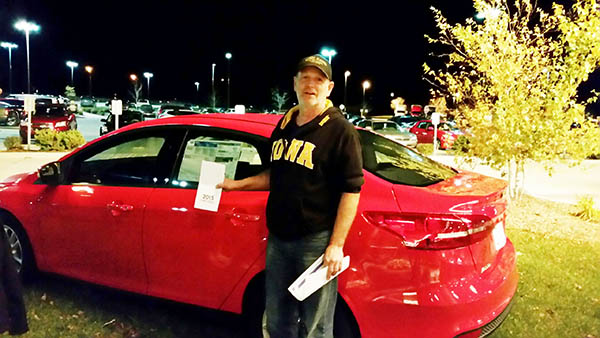 Don Peterson poses with the 2015 Ford Focus he won on Halloween from Diamond Jo’s Casino in Northwood. – Provided

Don Peterson of Lake Mills can attest to the luck that can be had by some at casinos.

He’s been going to Diamond Jo Casino on and off for years, and often participates in the casino’s monthly drawings.

According to Peterson, swipes of a player’s card and additional entries given to him through playing slots registered him in one of the casino’s latest promotional giveaways, the $80,000 Fall Focus Giveaway.

Of those entered in the giveaway, 25 names would be chosen at random for a weekly chance to win cash or a brand new 2015 Ford Focus. Despite the odds, Peterson went to the casino every 10 a.m. Saturday to ensure he met the first requirement of winning big, being present to win. Then he heard his name over the loudspeaker along with those of 24 others.

“It’s a surprise when you get called because you never think you’re going to hear your name,” Peterson said of the Halloween surprise.

One by one, Peterson watched as 21 other participants approached a wall of 25 envelopes. Each person would choose their own envelope before handing it off to a member of Diamond Jo to be opened and their prize to be revealed to them.

Peterson noticed there were a lot of $50 and $100 winners in front of him.

“For some reason I didn’t even think about the car,” Peterson said. “The farther it went on, the more I thought that I still had a chance at the two $500 ones.”

With only five envelopes left, and two $500 prizes still in contention, Peterson’s odds were 2 in 5 to win the top cash prize of the day. Instead, he won the car.

“When I first saw it, it didn’t even register,” Peterson said.

He didn’t drive away in a new car Saturday ,though. Instead, both Peterson and his wife, DeAnn, had a decision to make. Peterson said they could accept the car or could receive the cash equivalent of what the car cost the casino.

He was quite content leaving the decision up to his wife, telling her it was her car and she could keep it if she wanted it or take the cash. However, the decision of what to do was ultimately made by the couple.

Peterson noted they were not in the market for a new car; however, if they had been, a Ford Focus isn’t exactly what they would have been shopping for. The pair would need something larger to accommodate not only themselves, but their grandchildren who frequently spend time with them.

Peterson opted to take the cash option and is working with the casino to arrange his payout. For now, he plans to save the money for when they do look for a new vehicle, but the money could come in handy in other areas as well.

Peterson has worked at Cummins Filtration for over 36 years. During that time, he has seen the company go from employing over 600 to only two. Himself and another employee are currently maintaining the building while it sits on the market. When it is sold, Peterson may have to look for a new job.

Peterson is not concerned either way, nor is he too worried about exactly how much will receive from the casino. While he estimates he will take home approximately $14,000 that he’ll still have to pay taxes on, he’s not concerning himself with what he said he cannot change.