Key question in PolyMet mine fight: Whose data to trust? 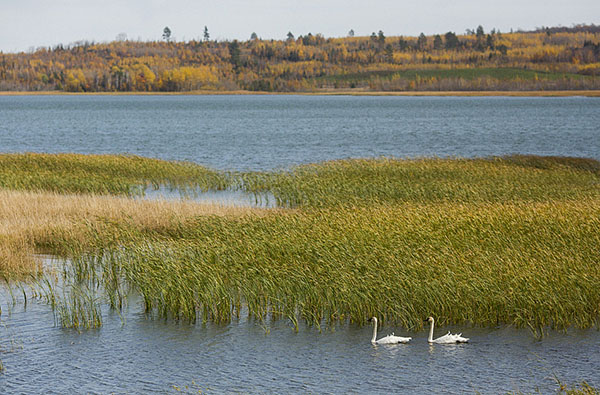 Swans swim through a man-made lake left behind after mining operations ended at a PolyMet site near Aurora. – MPR News file

Where will the polluted water go, and how much will there be?

These two questions sit at the heart of the battle now over a massive copper-nickel mine proposed for northeast Minnesota.

As state officials finish their environmental review of the PolyMet project, critics and supporters are dueling over hydrology models, mine runoff projections and whether pollutants will roll away from, or toward, Minnesota’s pristine Boundary Waters.

The Department of Natural Resources is expected to release its report sometime this week. Those findings will go a long way to deciding if the project goes forward.

But PolyMet supporters and critics are so divided over the data and the science, the DNR’s conclusions are unlikely to end the fight. At this point, they only agree that the stakes are huge and that the findings will affect northeast Minnesota for decades.

“With mines, water is one of the key issues,” said PolyMet Vice President Brad Moore. “You can put different assumptions in a model and you get different results, and so there can be differences of opinion, and experts battling about that, and it’s just a common area of conflict.”

Mines like the one PolyMet hopes to build can expose sulfide ore that can lead to acid mine runoff, so getting the data right is crucial. The water models in PolyMet’s draft environmental impact statement have already become a major source of contention.

The draft predicted any contaminated water from PolyMet would flow south, safely away from the Boundary Waters Canoe Area, and that less than 10 gallons per minute could escape untreated before the company’s planned water treatment operations purified it.

Those findings, however, are completely contrary to models run earlier this year by the Great Lakes Indian Fish and Wildlife Commission. The group concluded that not only could contaminated water flow north toward the BWCA, but that the volume could be 30 times greater than PolyMet’s models suggest.

Why such a huge difference in predictions?

Water modeling is extremely technical and complex, and the two sides disagree over a key assumption about water levels in a nearby taconite mine pit. When you change that input, their models return vastly different outcomes.

The Great Lakes Indian Fish and Wildlife Commission said PolyMet’s contractor, Barr Engineering, assumed the water level at closure of Northshore Mining’s Peter Mitchell pit would be about 300 feet higher than figures they have seen from the DNR.

Tribal scientists said when that much-lower water level is plugged into the model, it shows water from PolyMet flowing northward at much greater levels than predicted.

“You have to understand how much water is moving to be able to predict the loading of these contaminants of concern,” said Nancy Schuldt, water quality coordinator for the Fond du Lac Band of Lake Superior Chippewa.

If there’s more water it could carry away more contaminants, heavy metals like copper and aluminum, she added.

“This is important because this is the water that is not going to be captured and treated, unlike all the other water that is intended to be treated either at the mine site or at the plant site.”

Moore said the tribes’ model run does not match real-world conditions at the site, and that data shows groundwater could not easily move through the bedrock.

And even if it did, he said, PolyMet has designed several “adaptive management” measures to ensure compliance with water quality standards if the company detects a northward flow of water after the mine opens.

Potential methods, which he said will be detailed in the final environmental statement, include lowering the water level in one of PolyMet’s pits, grouting fractures in the bedrock where water would travel north, and drilling injection wells to push water into the groundwater system north of the mine.

That amounts to a “ridiculous over-reliance on adaptive management” said Schuldt.

“We’re talking about incredible volumes of water that need to be managed,” she said. “And I’m not convinced there’s any technology available to deal with it.”

The Minnesota DNR declined an interview request until the final environmental impact statement is released. The department said the document will address issues raised about the water model.

The group Friends of the Boundary Waters Wilderness said environmental groups have made a similar request to Gov. Mark Dayton.

“We think it makes a lot of sense to get some scientists that the state can trust, and feels are independent and unbiased, and let’s rerun this thing,” said Betsy Daub, policy director for Friends of the Boundary Waters Wilderness. “Let’s not just rely on the work that PolyMet has done, let’s get our own independent experts in there.”

Moore said he expects water modeling to eventually be the focus of litigation over the project.

That’s what happened eight years ago in Michigan after that state’s Department of Environmental Quality approved the Eagle Mine, a nickel and copper mine Dayton visited last week.

Attorney Michelle Halley argued against that mine for the National Wildlife Federation. The hearing, she said, lasted 42 days.

“The company had their experts, we had our experts, the DEQ often had their own opinion about things, and so we would have whole sets of witnesses on these various topics,” she said. “Essentially it ended up being the words of experts against other experts.”

Eventually, the judge ruled in favor of the mine.