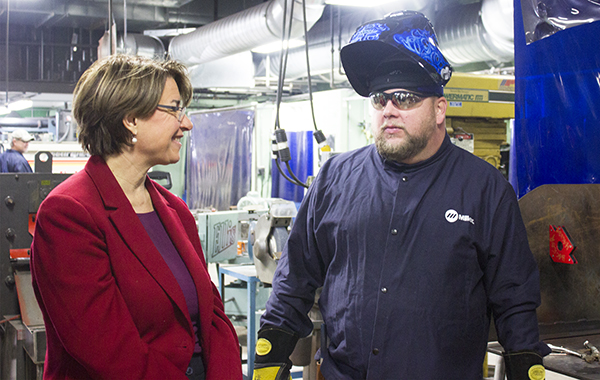 Klobuchar, DFL-Minnesota, said she plans on addressing the issue in a floor speech when the Senate reconvenes. She said apprenticeships are an important part of addressing the workforce shortage.

Her comments were made at a roundtable discussion with Albert Lea government and school officials and business leaders at Riverland Community College. They talked about workforce challenges the area is facing and what things can be done to alleviate some of those concerns.

Riverland President Adenuga Atewologun and other local leaders described the effect Riverland has had on the community and the workforce issues the community is facing.

Albert Lea and southeastern Minnesota are seeing a shortage in both skilled and unskilled workers, and Riverland is making changes at its campuses in Albert Lea, Austin and Owatonna to address those needs. 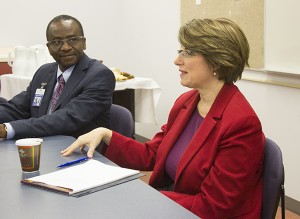 “We need help as a society to emphasize that these are good, quality positions,” Funk said.

The city needs workers but is having a hard time finding places for them to live, said Randy Kehr, executive director of the Albert Lea-Freeborn County Chamber of Commerce.

Freeborn County’s unemployment rate was 3.1 percent in September, compared to 3.8 percent in Minnesota and 5.1 percent in the United States.

According to minnesotaworks.net, there were 202 part- and full-time jobs postings within a 10-mile radius of Albert Lea in October.

Following the discussion, Klobuchar was given a tour of Riverland. She met with students and administration in hands-on environments, including the automotive and industrial departments.

“It was great,” Klobuchar said.