Lorraine was born May 2, 1921, in Albert Lea to parents Lyman and Ethel (née Envoldsen) Walker. 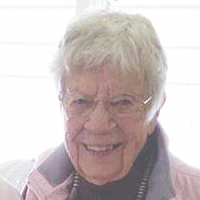 On May 2, 1942, Lorraine married Lyle Heilman in Alden and later divorced. Two sons were born to this union.

On Oct. 21, 1972, she married Don Provo in Sioux Falls, South Dakota. Lorraine and Don enjoyed many years living on Fountain Lake in a home blessed with many visits of children, grandchildren, nieces and nephews.

Lorraine was employed at Freeborn Mower Co-op. for 27 years. One of her favorite hobbies included playing bridge, which she was still actively doing until a few weeks ago.

Memorials are preferred to the Albert Lea American Legion.

A private family viewing and burial was held Saturday.