The celebration of life for Lorraine M. Slette of Albert Lea will be at 11 a.m. Monday at First Lutheran Church in Albert Lea. The Rev. Diane Odermann will officiate. Interment will be in Hillcrest Cemetery. Friends may visit with family one hour before the service at the church.  Bonnerup Funeral Service is assisting the family.

She was born on May 25, 1918, in Alcester, South Dakota, the daughter of Herbert and Nellie (Ludwig) Gasser. 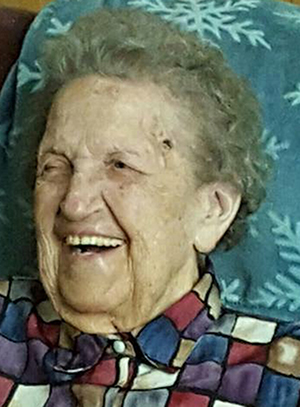 On April 25, 1943, she married Norman Slette in the parsonage of First Lutheran Church in Albert Lea. Together Lorraine and Norman built a house on Front Street in Albert Lea, where she lived for 59 years.

Throughout the years the couple continued the Slette family heritage, baking and delivering pies, which they supplied to many area eateries. Lorraine will be affectionately remembered as “The Pie Lady.” She was also a seasoned lefsa maker, this being the first year of many, many years she missed First Lutheran’s preparation for Holiday’s Ahead.

Lorraine was a member of First Lutheran Church, where she enjoyed serving on many committees and participating in the many activities throughout the years. She had graciously given her time to deliver Meals on Wheels for many years.

Lorraine is survived by her nieces and nephews Sue Urness of Rochester, David Witt of Cook,                  Margie and Bill Schwiesow of Omaha, Nebraska, Joanne and Earl Jensen of Apple Valley, Judy Brown of Belle Plaine, Barbara Henderson of Burnsville, Chuck and Cyndi Slette of Bloomington, Sandy and Chipper Slette- Parr of Juneau, Alaska, and Pamela Slette of Albert Lea; added family member, Wayne Miller, of Rochester; and many great-nieces and nephews.

Lorraine’s friendly smile and engaging personality will be greatly missed. She will be lovingly remembered for her positive, giving, go with the flow attitude and her great sense of humor.