Funeral services for Margie Jean Murtaugh, 83, of Albert Lea will be at 10:30 a.m. Friday at United Methodist Church in Albert Lea. The Rev. John Mitchem will officiate. Interment will be at Graceland Cemetery at a later date. Visitation will be from 4 to 6 p.m. Thursday at Bayview/Freeborn Funeral Home and one hour prior to the service at the church. Online condolences are welcome at www.bayviewfuneral.com. 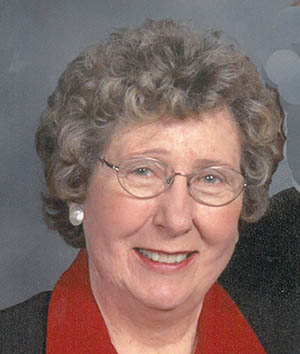 Margie Jean Murtaugh was born April 2, 1932, in Newry Township, the daughter of Arthur Peter and Victoria Marie (Broulik) Springborg. Margie grew up in rural Freeborn County and later in Brainerd, where she graduated from high school in 1950. She continued her education in Rochester, becoming a registered nurse. Margie worked as a nurse prior to being an instructor at Naeve School of Nursing. On June 18, 1960, Margie was united in marriage to James Murtaugh in Albert Lea. She became an owner/shareholder of Heart of the Artichoke Antique and Craft Store in 1969. She retired in 1991. Margie was a former member of Christ Episcopal Church and was a member of the United Methodist Church. She was also a member of Shades of Jade Garden Club and the American Legion Auxiliary. Margie volunteered as a master gardener and at Story Lady Doll Museum. She enjoyed sewing, gardening and time spent with her family. After retirement, she and Jim enjoyed country-western line dancing with a group of friends for many years. Margie continued to be active up until the time of her death.