Old-fashioned musical to be performed by high school students 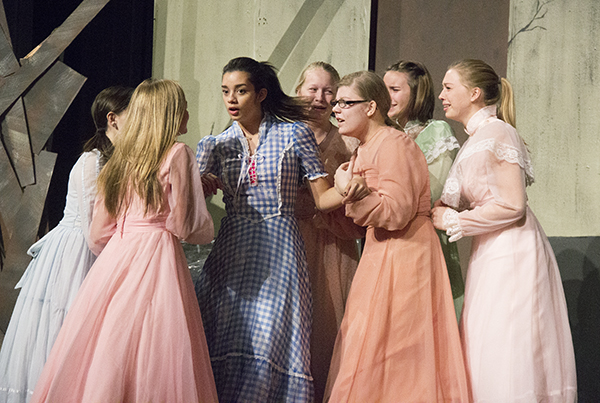 On old-style musical will come to the Albert Lea High School stage starting on Thursday with the production of “Seven Brides for Seven Brothers.”

A cast and crew of more than 50 students will present the musical of Milly, a young bride who marries Adam, played by junior Travis Nemec, the oldest of seven brothers living in the Oregon woods in the 1850s.

Milly, played by junior Heather Wirkus, plans to civilize and marry off her six rowdy brothers-in-law to ensure the success of her own marriage when this backfires, and the brothers, in their enthusiasm, kidnap six women from a neighboring town to be their brides. 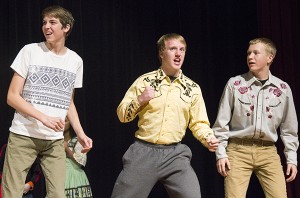 Director Diane Heaney said the school hasn’t done an old-style show for a long time. It is based on the Academy Award-winning musical film from the 1950s with the same name starring Howard Keel and Jane Powell.

Heaney is being assisted by co-director and 2008 ALHS graduate Ross Pirsig. Pirsig, who is now an English language teacher at the school, was active in the theater when he was in high school and was in several plays, including “Joseph and the Amazing Technicolor Dreamcoat” and “South Pacific,” along with others at the Marion Ross Performing Arts Center. He will be a part of “Dylan Kaercher’s Lights, Camera, Christmas” in December at the Marion Ross Performing Arts Center with actor and director Dylan Kaercher.

The students started practicing in September and have worked their way up to where they are adding more and more into their practices each day.

Heaney said the large cast and crew has allowed many to be involved and get a taste of theater.

“Everybody gets along so well,” Pirsig said. “Everybody’s respectful and supportive.”

Heaney and Pirsig credited geography teacher Erin Losinski for heading up much of the work on the sets, along with Kaercher. 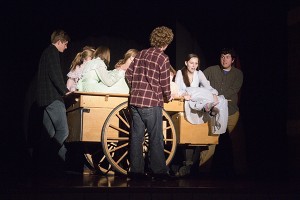 Student Brayden Boettcher, one of the suitors in the musical, encouraged people to attend.

“Musicals are one of the best things this high school has,” Boettcher said.

He said the cast has been working hard to prepare themselves.

The students will present a matinee on Wednesday for seniors and fifth-graders from the district, with the presentations for the general public beginning on Thursday.