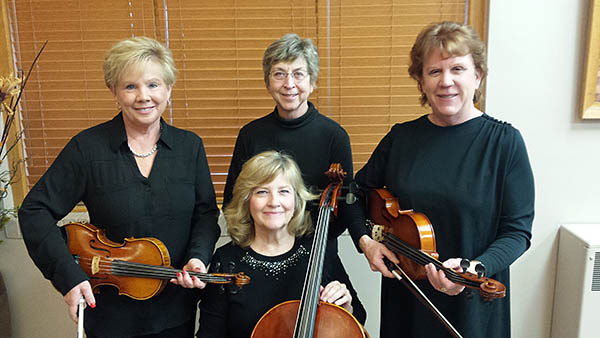 What compels people to continue playing their instruments in an orchestra for many years? Four retired teachers share their personal motivation for staying involved in music in a news release. The women are  Deborah Cooper, Cindy Fjermestad, Jane Hanson and Lilah Aas, who all play in the Southeastern Minnesota Chamber Orchestra.  For three of them, it was love of music and encouragement from the director that brought them back.

Cooper started playing the violin in third grade in Huron, South Dakota.  Her mother was a music teacher and encouraged her to play. She started playing her grandfather’s violin, which he brought with him from Germany. She came to Albert Lea right out of college in 1970 to teach orchestra and began playing with the Austin Symphony.  Starting in 2006, Cooper started playing under the direction of Brock Besse for the First Lutheran Christmas concerts. Later these seasonal concerts developed into the Southeastern Minnesota Chamber Orchestra.

Fjermestad began playing the cello in sixth grade in Rochester. She had wanted to play the violin, but the school violins were all taken, so she was encouraged to play the cello. She played the cello until she graduated from high school and did not play again for many years. After she retired from teaching in 2008, knowing that there was an orchestra in Albert Lea, she decided to get back into music and purchased a cello. She began to play in the Southeastern Minnesota Chamber Orchestra in 2008.

Hanson began playing the violin in fourth grade in Albert Lea and played through junior high school, but did not play in high school. When she went to Luther College, they needed string players, and she joined the orchestra and played there for four years. She did not play again until 2006 when Besse invited her to play in the orchestra for the First Lutheran Christmas concert. Since that time, she has increased  her musical participation. Currently,  she plays in the Southeastern Minnesota Chamber Orchestra, the Austin Symphony and Opus 4, a string quartet.

Aas started her musical endeavors in Decorah, Iowa, by playing the piano at age 6.  She studied piano through her sophomore year in college, but rarely played in public after that time. She also played the alto saxophone starting in eighth grade through high school. In 2005, she was invited by Besse to play keyboards in the contemporary worship band of First Lutheran Church. In 2009, Besse  asked her to play auxiliary percussion which includes marimba, xylophone, vibraphone, glockenspiel and tubular bells in the Southeastern Chamber Orchestra.

These four orchestra members are a representative of the full membership of the orchestra.  Musicians come not only from Albert Lea, but also surrounding communities. Many also play in other musical groups.  The orchestra will present its Pops Concert at 3 p.m. Sunday in the Albert Lea High School auditorium. Tickets are available at the door and from orchestra members. Adult tickets are $10, and seniors are $8. Both are $2 more at the door.