Riverland to open ‘Dancing at Lughnasa’ 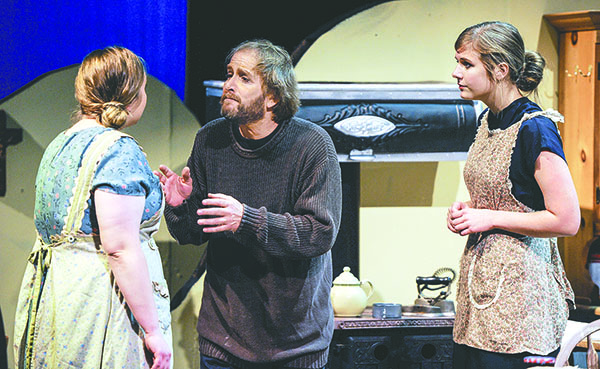 The Riverland Community College Theatre Department is getting ready to open the second production in its season today.

“Dancing at Lughnasa,” by Irish playwright Brian Friel, will open at 7:30 p.m. Wednesday. The production runs at 7:30 p.m. today through Saturday, a 2 p.m. performance on Sunday.

The play tells the story of five unmarried sisters eking out their lives in a small village in Ireland in 1936. Their spare existence is interrupted by brief, colorful bursts of music from the radio, their only link to the romance and hope of the world at large. When two unexpected visitors arrive, the past and present collide and begin to destroy the foundation of the family forever. The play is Friel’s tribute to the spirit and valor of the past.

“It’s a memory play told through the eye of a grown man who’s looking back to the summer of 1936,” director Susan V. Hansen said.

The play is told through the eyes of Michael. Now a grown character, he’s looking back on a specific three weeks of his life in 1936 when he was 7 years old and was living with his mother and four aunts. Michael touches on the power of memories. The five strong women are holding on to family, values, belief, hope and strength. They have individual dynamics and are forever changed by encroaching technology, religious conflict, and the desire to celebrate life. Their strength, humor and love guide them through a tumultuous time.

“All these things are tied together, and we learn about the family, the family dynamics, the conflict, the love, the hope, and shortly after that the family changes drastically,” Hansen said. “So all these events … lead up to the changes that he talks about.”

“Dancing at Lughnasa” will be performed at the Frank W. Bridges Theatre in the east campus of Riverland Community College in Austin. Individual tickets are $13 and currently on sale at www.riverland.edu/tickets. Tickets may also be purchased at the Riverland Box Office. Riverland students receive two free tickets to each performance with a valid student ID.

For more information, contact the box office at 507-433-0595 or by emailing boxoffice@riverland.edu.

“Dancing at Lughnasa” is suggested for ages 10 and up.

Hansen is excited for the performance and said the cast is looking forward to opening night.

“They’ve been working very hard,” she said. “They’ve all had to learn dialect and Irish dancing and ballroom dancing, and I think they’re very excited to see how it’s all coming together.”

Lughnasa is the Celtic Harvest Festival named after the God of the Harvest, Lugh, which starts around Aug. 1, halfway between the summer solstice and the fall equinox and runs through harvesting season into September. Hansen is excited for the audience to experience the beauty in the play.

“It’s a beautiful play; I have seen it several times,” Hansen said. “I was very surprised to find out it had never been produced here.”

Hansen hopes the actors appreciate the relationships between the characters, which are strong, along with the realistic performance, and she hopes the audience is moved by the characters and their hopes and dreams.

“Hopefully they’ll be transported back through time and be moved by the strength of the family and the effect that they’ve had on each other, and I think it’s pretty universal the dynamics between family members,” she said. “I think people in the audience can relate to that — the love, the stress, the anger, the hope, all of that combined. Hopefully it makes them think a little bit of their family.”