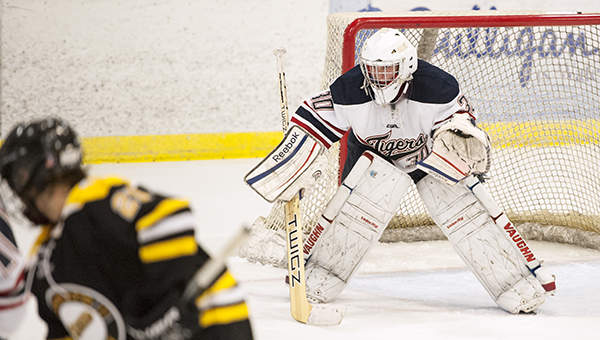 In a series with four of the last nine games decided by one goal, the Albert Lea boys’ hockey team aims for its first win over Northfield since Dec. 10, 2013.

“Northfield is a tough team, and we’ve had some close games with them,” said Albert Lea coach Roy Nystrom.

However, Northfield has won seven of the last eight meetings, which included knocking Albert Lea out of the section playoffs three consecutive seasons from 2011-12 to 2013-14.

Nystrom, who was inducted into the Minnesota Hockey Coaches Association Hall of Fame in 2014, is in his 50th season as a head coach, his 43rd with the Tigers. He said the keys to beating Northfield are the same as any game.

“We’ve got to play good defense on our own end of the rink, and we’ve got to floor check like crazy,” Nystrom said. “Everything is the same. There’s never really anything that changes.”

In Albert Lea’s opener, the Tigers beat Mankato East/Loyola — a team that swept Albert Lea in two games last season — 7-2 Thursday at Albert Lea City Arena. Click HERE to read a story about the game and view a photo gallery.

The Raiders were 16-10-2 overall last year with a 10-8-2 Big Nine Conference record. Northfield beat Red Wing and Mankato West in the section playoffs before losing 2-1 against New Prague, the eventual Class A state consolation champion.

Albert Lea closed out last season by winning four of its last five games, which included a 2-1 double overtime loss at Mankato West in the section playoffs to finish the year with a 12-15 overall record and a 7-11 mark in the Big Nine Conference.