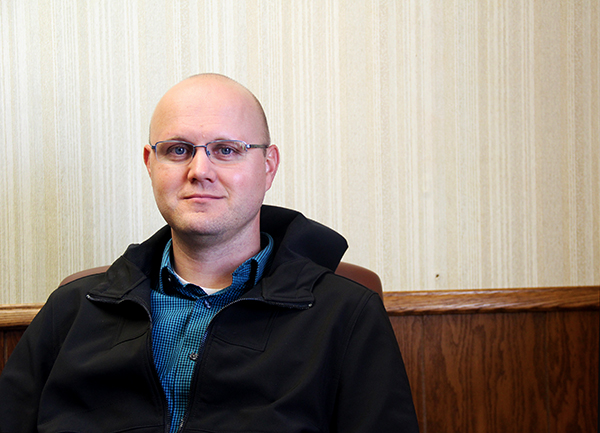 Attorney Beau Hartman of Wells sits at the desk in his new office at Savelkoul Law Office in Albert Lea. Hartman began work at the firm on Sept. 8. Evan Verploegh/Albert Lea Tribune

Attorney Beau Hartman has led a unique path that has landed him back home.

After growing up in Wells, Hartman returned to begin his own law practice. As of Sept. 8, he joined Albert Lea’s Savelkoul Law Office in the next step of his journey.

After graduating from University of Wisconsin-La Crosse with a degree in philosophy, Hartman knew his time in school was not going to be complete.

“When I was 30 years old I had my first experience in jury duty,” he said. “I came home biting my lip and I told my wife, ‘I think law school would be a lot of fun.’ And she gazed around the room and said, ‘Let’s do it.’”

Hartman was living in Kansas City, Missouri, at the time, working with a nonprofit organization called International House of Prayer, in which he acted as a missionary along with his wife, Jodi, and went to Bible school “just for fun.” This was just another stepping stone on Hartman’s trail.

“I love learning,” he said. “I could spend all day, everyday, in a classroom learning about anything. In going to law school, though, it never intended to be a profession. I was just going for fun more than anything.”

After the Hartmans’ five-year stay in Kansas City, where they had their first three children, the family moved to Virginia Beach where Hartman attended Regent University School of Law.  After the three-year intensive program, and the birth of their fourth child,

and the birth of their fourth child, Hartman was drawn back to Minnesota where he ended up taking the bar exam.

“The reason I wanted to return is the people here,” he said. “When it comes to being able to reach out and serve the people in practical ways, this is the place to be. Because we are so familiar with the area, we are able to be a part of the community and help serve it. We love being a part in what goes on around us.”

Since the Hartmans’ moved back to the area, the family has seen the birth of their fifth child, for a total of three boys and two girls. When not in the office, the family loves to stay active in anyway possible, whether it be golf or one of the many sports his children are involved in.

“My wife and I both like to be active, so we like to include our kids in whatever we’re out doing,” he said. “Last year as a whole family we took up hockey, which has been a lot of fun. Whatever the sport is, whatever is available.”

With the size of his family, Hartman tries his best to be as involved in his children’s lives as he can and is always looking for activities to suit his big group, which includes children from ages 1 to 9.

“Family is a big deal in my life, and we do a lot together,” he said. “It’s not just because we have a big family, either.”

With such large goals and a passion for discovery, Hartman did not want his desire to attend law school to come between him and his family. He said one of the most important moments of his life came after he completed his degree.

“The best compliment I’ve ever received came from my wife,” he said. “She said, ‘You didn’t lose us in the process. You’re still as good of a dad and as good of a husband now as you were day one of law school.’ That was really significant to me.”

Hartman’s grounded sense of balance has allowed him to tackle many topics in his life, whether it be his change in a bachelor’s program from math to philosophy or his moves between growing up in Wells, attending college in La Crosse, Wisconsin, moving to Madison, Wisconsin, then to Kansas City, Virginia Beach and then back to his roots in southern Minnesota.

He couldn’t be happier to be back residing in Wells and working at Savelkoul Law Office in Albert Lea. He finds the area, over all the others he has lived in, is the best location to raise his family.

“I think we always knew we would end up back here at some point,” he said. “All of my family is in Minnesota. My wife’s family is all in Wisconsin. Coming back here was to serve the people of southern Minnesota.”

Hartman’s law career has lasted a few years now, and he is more than content with the route he has chosen.

“Having the skills in legal work has not only opened doors for me, but more so for the people in the area,” he said. “There is a lot to help people out with and people are really important to me.  Having that skill to offer them is a lot of fun.”