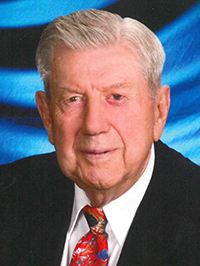 He was born Nov. 3, 1924, in Duluth to Emil and Judith (Scholander) Schaffer. Following his graduation from Two Harbors High School, William attended Austin Junior College while working part time at Hormel Foods Corporation. He served his country in the U.S. Navy for two years during World War II, taking part in three engagements in the Pacific and achieving the rank of seaman first class.

On June 21, 1947, in Dodge Center William married Marjorie Ulve of Albert Lea.  They had no children. He spent his 39 1/2-year career with Hormel Foods in Austin, working as a senior rate analyst in the transportation department, retiring in 1986.  William was a member of Our Savior’s Lutheran Church, the Masonic Fidelity Lodge  No. 39, Royal Arch No. 14, Counsel No. 7, St. Bernard Commandery No. 13, American Legion Post 91, the Elks Club and the Eagles Club. He also belonged to the Austin Country Club for 44 years and enjoyed his many winters spent in Arizona.

In his younger years, William bowled and played football, basketball and tennis. He also enjoyed hunting, fishing and learning how to swim. In later years he took up downhill skiing. Bill was very proud of his Lionel train set. He enjoyed watching his friend Drew Hinds assemble the track on an 8-footx16-foot table in the basement. Having had no children, he especially enjoyed coaching the Elks little league baseball team, a program he also helped manage. William recorded training films for many Austin High School and Pacelli athletic teams. He enjoyed every minute of his well-spent time helping others.

William is survived by his wife, Marjorie Schaffer, of Austin; and many nieces, nephews, cousins, other relatives and many friends.

He was preceded in death by his parents Emil and Judith Schaffer.

He will be sadly missed by all who knew and loved him.

Funeral services will be at 11 a.m. Tuesday at Our Savior’s Lutheran Church in Austin with the Rev. Karen Behling officiating. Visitation will be from 5 to 7 p.m. Monday at Worlein Funeral Home in Austin and one hour prior to the service at the church on Tuesday. A Masonic service will be at 6:30 p.m. Monday at the funeral home.  Interment will be in Oakwood Cemetery with military honors by American Legion Post 91 and V.F.W. Post 1216.  In lieu of flowers, memorials can be directed to the Our Savior’s Lutheran Church building fund or a recipient of the donor’s choice. Services are being prearranged and performed by Worlein Funeral Home of Austin. Condolences may be expressed to the family online at www.worlein.com.