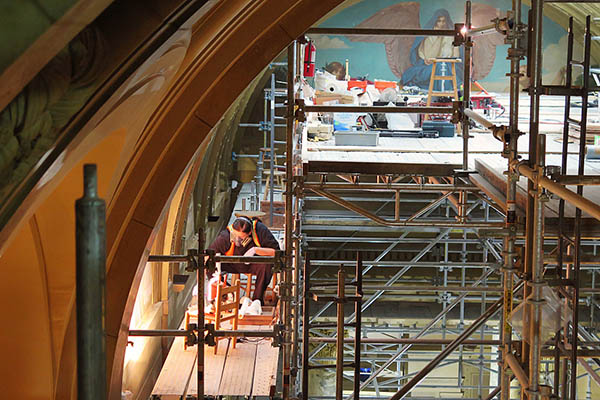 An art restorer works near the top of the Minnesota State Capitol’s east wing Monday. The Capitol is expected to remain closed until 2017, though the state House plans to return to session in March. -Tim Pugmire/MPR News

The Minnesota Capitol building is a mess. From top to bottom, construction crews are restoring floors, walls and ceilings. The House chamber is stripped bare and filled with layers of scaffolding.

While conditions will improve by the time the Minnesota House returns in March, officials are cautioning that they’ll still need to restrict public access to the legislative sessions as the $309 million Capitol restoration project trudges on. There will be no running water or usable restrooms inside the Capitol and the public galleries will be closed.

That means there will be little room for other Minnesotans to witness the work of the House in person. Even in an era of TV, social media and other instant communication, the lack of physical access to the House during the 2016 session has some concerned about open government.

That includes House Minority Leader Paul Thissen, DFL-Minneapolis, who says many citizens already feel like they’re shut out of the legislative process.

“Having that direct interaction with constituents and being able to interact with their legislators as they go to the Capitol or as they’re on the floor and voting on things, to be able to send in notes and talk to them, all of that is going to be interfered with,” Thissen said.

House Speaker Kurt Daudt, R-Crown, said the decision to use the chamber for the 2016 session was made before he took over his leadership role. Daudt said he would like to allow public access to the building, if possible.

“Obviously all of our sessions are televised, and whether somebody stands right outside the door or watches on TV, they probably can actually see more on TV than they can by standing outside the door,” he said. “They won’t be allowed in the chamber or in the gallery, which I think is a shame. We’re still trying to work out the details on that to see if we can get the gallery open.”

The Department of Administration has already ruled out that option. Officials will instead provide space in neighboring buildings for the public to gather and watch House floor sessions on TV.

Thissen said Daudt should have looked at other, less disruptive options for the 2016 session. One of those options is using the new Senate office building opening soon across the street from the Capitol. The Senate will conduct its floor sessions there next year.

But House Republicans have never shown any interest in using that option. They opposed the Senate building and made it a campaign issue against Democrats last year.

Still, Daudt left open the possibility that he might be willing to consider other alternatives.

“If it becomes a problem, I’ll certainly look at moving elsewhere. But at this point they’ve told us that we can hold our session there,” he said, adding that those plans remain on track.