A.L. couple lauded as heroes for turning in found money 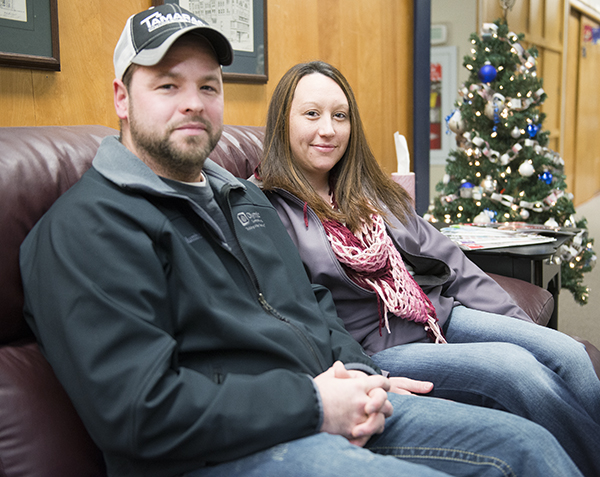 Matt Humphrey and his girlfriend, Jessica Armstrong, found $300 in cash in the Albert Lea Walmart parking lot on Dec. 9. The couple turned in the money to the customer service desk. – Colleen Harrison/Albert Lea Tribune

When Matt Humphrey and his girlfriend stumbled upon an envelope filled with cash, he didn’t immediately know what to do.

“It really did test my honesty,” Humphrey admitted.

It happened shortly after 6 p.m. Dec. 9 at Albert Lea’s Walmart.

Jessica Armstrong, 28, spotted it first and asked Humphrey if he saw the same thing. He acknowledged he did as Armstrong turned to pick it up.

On the outside of the envelope were the words, “thank you, Chris.” Inside, the couple found three $100 bills.

The couple then went into the store for their intended purpose, to buy groceries and Christmas presents for their three children, Kaleb, 7, Ethan, 3, and Marilynn, 1.

For a family who admittedly lives paycheck to paycheck, that $300 would have come in handy during the shopping trip, yet as Humphrey headed to the registers, Armstrong made her way to customer service to hand the envelope and its contents over to one of the store’s managers.

Humphrey then went a step further.

Afraid the rightful owner might not realize where the money had gone, he turned to the Buy & Sell — Albert Lea Facebook page.

He noted that an envelope of money had been found and turned into Walmart. To claim it, all the rightful owner had to do is go to the customer service desk and tell staff what name was on the envelope.

According to Humphrey, responses flooded in with words of admiration and praise. Some called him a hero; others applauded their actions; another left a simple, “God bless you.”

“It just blew up,” Humphrey said. “I really wasn’t expecting that type of reaction for just doing the right thing.”

Both Armstrong and Humphrey said their decision reflects the way the live their life now — they try to do the next right thing.

“Being a recovering addict is hard work,” Humphrey said. “I’m trying to be a better person today then I was I yesterday ­every day.”

Humphrey is on his 19th month of sobriety; Armstrong is on her 18th.

Armstrong explained that part of recovery is making a conscious decision to stay on the right path.

For Humphrey, the motivation to do so it came easily. While keeping the money could have meant more presents under the tree for his own children, he said the money wasn’t theirs.

“I didn’t want to be that guy who ruined Christmas for someone else,” he said.