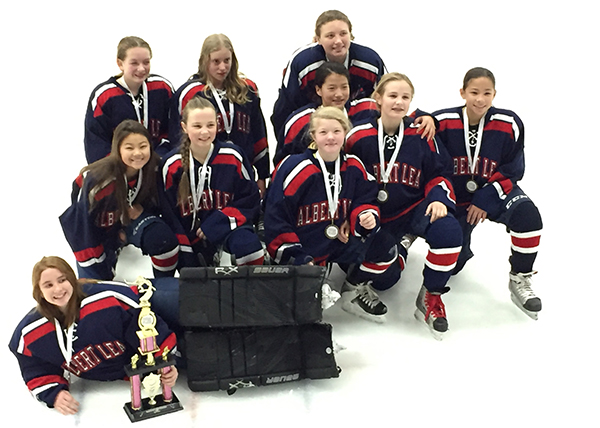 The Albert Lea U12B girls’ hockey team began the 2015-2016 season with success, according to a press release.

Albert Lea traveled to Austin on Nov. 19 and won 5-1. Taylor Stanek led the scoring with a hat trick. Albert Lea kept play in the offensive zone for the majority of the game, recording 32 shots on goal.

The team’s season continued Nov. 21 and 22 at the Mankato Invitational.

Highlights of the tournament were a 5-4 victory over Chaska/Chanhassen. Jaiden Venem led Albert Lea with two goals from her defensive position, and she scored the game-winner late in the third period. Esther Yoon claimed Player of the Game honors twice with her hard work and team play during the tournament.

Next was a home game on Nov. 29 against Waseca. Albert Lea won 7-0. Emma Piechowski was in the goal to record the shutout. Katie Uthke helped in the effort with aggressive play and has scored four goals this season.

In recent action, the team placed third on Dec. 5 and 6 at the Hastings Invitational.

In the third-place game, Albert Lea beat Mahtomedi 5-1. Alli Dulitz led the team with hard work moving the puck into the offensive zone to produce scoring opportunities. She had one goal and two assists in the game. Emilee Schmitt had a great weekend getting involved in many of the offensive rushes and had an assist on Dulitz’s goal.

The team would like to send out best wishes to Malana Thompson, who was injured in a game. The team hopes for Thompson’s speedy recovery and return to the team.