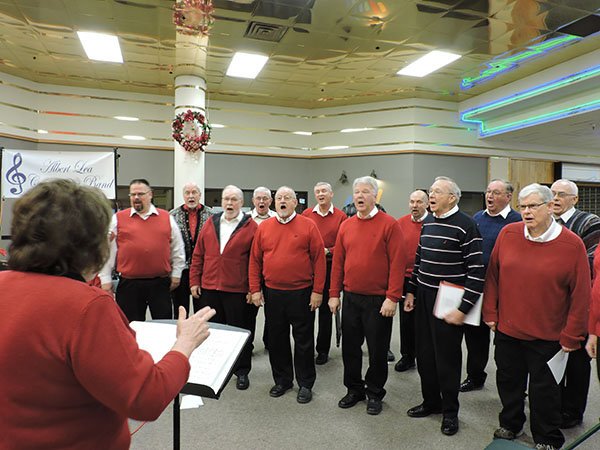 The groups’ first performance will be at 3 p.m. at United Methodist Church. The groups will come together again for a 7 p.m. performance at St. Theodore’s Catholic Church. There is no charge for either one of the concerts, however, a free will donation will be accepted. Just like in previous years, the proceeds from the concerts will benefit two local charities. This year’s recipients are The Salvation Army and the Freeborn County Historical Museum.

Harmony Junction’s President Pete Rush is excited about the performances. 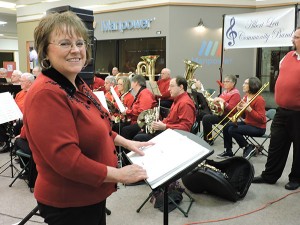 Lora Virgil is the director of both Harmony Junction and Faith Tones. Men interested in joining Harmony Junction can learn more by meeting them at 7 p.m. on Tuesdays at United Methodist Church or by contacting Pete Rush at 507-383-7766. Women who would like to learn more about becoming a member of Faith Tones can contact Virgil at 507-383-7875. – Kelly Wassenberg/Albert Lea Tribune

“This year, I think, it’s going to be a unique show because it’s somewhat different than what we’ve done in the past,” Rush said.

Typically, the acapella group is joined by the Albert Lea Community Band. Due to a conflict in schedules, that could not happen this year, which led to their partnership with Faith Tones. Arranging the collaboration was quite simple, as both musical groups have the same musical director, Lora Virgil.

“I wanted to combine my women’s choir from United Methodist with Harmony Junction and just make it one big, happy affair,” Virgil said.

Musical selections will include a variety of Christmas favorites, ranging from the secular numbers such as “Rudolph the Red-Nosed Reindeer” and “Jingle Bells,” to more spiritual pieces like “O’Holy Night” and the Advent hymn “Low How a Rose E’er Blooming.” The concert will also feature various musical ensembles including solos, a duet, trio and quartet.The audience will be encouraged to sing along, as well.

According to Virgil, the women’s choir will also sing a few of their own numbers, such as “Rockin’ Around the Christmas Tree” and “Sing We All Noel.”

I think the audience is going to love it,” Virgil said.

Rush hopes the public will join them at a performance and enjoy the concert as much as he enjoys participating in it.

“Music is just a big part of my life. I’ve come to understand that it’s a way of praying as well so it’s a close link with God. We all enjoy doing it.”

How much: Donations accepted